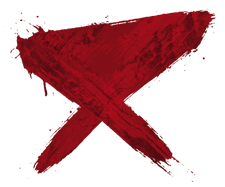 "A crawling foulness will overcome you because you did not shut the gates of your heart to iniquity."
—A prophetic warning of the rat plague

The rat plague (called "The Doom of Pandyssia" by the Heart[1]) is a rodent-borne contagious disease, responsible for the decimation of the population of Dunwall during the events of Dishonored. According to studies conducted by Doctor Galvani, the plague has an unusual migration pattern:[2] the oldest strains of the disease exist in the city's slums and other impoverished districts, rather than the docks, the most likely location for invasive foreign pests to have entered the city.[3]

Corvo Attano eventually discovers that the plague was introduced to Dunwall by Royal Spymaster Hiram Burrows as a means of putting an end to poverty in the city, with the results proving catastrophic.[4]

"Hear her terrible moans! The disease is both painful and disfiguring."
—The Heart[5]

Symptoms of the plague include discolored skin (particularly on the face and chest), weight loss, and thinning of the hair. As the disease progresses, the lungs and brain become more damaged, leaving its sufferers with a chronic cough and a significant decrease in cognitive ability.

Late-stage symptoms include subconjunctival hemorrhaging, which causes blood to drip from the eyes, and infestation by parasitic stinging insects. Early efforts to combat the plague are fruitless once these symptoms surface, and prior to the discovery of a cure, the disease is lethal at this stage.[6] Plague sufferers in the last stages of the disease are known colloquially as "weepers".

Preventative methods, such as Sokolov's Elixir and Piero's Spiritual Remedy, exist but are expensive and scarce. As such, they are generally not affordable to the majority of citizens in Dunwall. Cheaper and less effective methods for combating the disease have emerged, including bootleg elixir produced by the Bottle Street Gang,[7] homeopathic remedies, and ritualistic ceremonies.[8] Although official sources discourage the use of these methods, given the inaccessibility of elixirs, they are still commonly used.

Natural resistance to the plague does exist, as explained by a doctor in the Flooded District who is caring for a dying patient. He emphasizes, however, that the chances of the body fighting off the disease on its own are a thousand to one. Mace Brimsley is one such immune individual.[9] There are also those who carry the plague but will not themselves turn into a weeper.[10]

"There is always a cure! The question is - what are you willing to sacrifice to have it?"
—Anton Sokolov[11]

The rat plague has killed half of Dunwall's population since its initial spread. Empress Jessamine Kaldwin sent Corvo to solicit the other nations of the Empire for aid in stemming the plague, but the effort was in vain, and Dunwall was subsequently blockaded.

While the Empress was unwilling to use draconian measures of containment to prevent the plague's spread, others in her government were not; following her assassination, Lord Regent Burrows institutes martial law and commissions Anton Sokolov to invent new methods of containment. walls of light quarantine infected areas, a dusk-to-dawn curfew has been instituted (both to reduce human contact with rats and to decrease the chance of infected individuals breaking quarantine), and both civil and religious officials have been given wide-reaching power to deal with disruptive or uncooperative persons.

Red crosses mark buildings where the plague has struck, and linen-wrapped bodies that await disposal litter Dunwall's streets and residences. Guards are instructed to place these corpses on barges and then trains bound for the Flooded District by official Dead Counters;[12] however, some guards have taken to dumping them into the city's waterways to avoid prolonged exposure to the disease, if the bodies are not first consumed by rats.

Individuals suspected of contracting the plague have their property and assets immediately seized by the City Barrister, which are transferred to the state if there are no surviving kin to inherit.[13][14] Corruption and bribery within the Legal District has led to false claims of infection on otherwise healthy persons so that their property may be seized for political and financial gain.[15]

During the infestation, scientists such as Doctor Galvani and Anton Sokolov conduct research to find a cure for the plague, occasionally in secret due to a ban on certain scientific practices.[16] In the low chaos ending of Dishonored, provided that both Piero Joplin and Anton Sokolov survive, they combine their efforts and find a cure for the plague that heals even late-stage victims. They can at one point be seen curing weepers in their shared laboratory.

A guard wearing a mask to avoid catching the plague.

Plague corpses are unceremoniously dumped into the waterways of Dunwall.

Guards throw the corpses of the plague-dead into a boat.

Corpses of the plague dead.

A cart used for moving corpses.

Bodies are dropped into a large boat.

A pile of corpses.

The City Watch disposes of corpses.

Corpses in the street.

A dead plague victim in an abandoned apartment.

Bodies of plague victims in an abandoned apartment.

A man mourns his son, who has died of the plague, in the Flooded District. 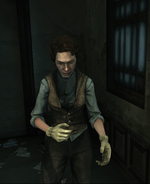 Rats among the corpses of plague victims.

Signs warning about the plague in Slaughterhouse Row.

Sheets for the plague dead.

Rotting plague dead.
Add a photo to this gallery

Retrieved from "https://dishonored.fandom.com/wiki/Rat_Plague?oldid=156493"
Community content is available under CC-BY-SA unless otherwise noted.