Ramos is a minor character in Dishonored 2. He owns a smuggling boat, which he hires out from the Campo Seta Dockyards.

Shortly before the events of Dishonored 2, his boat was hired by a group of civilians, including Maya. It was raided by the Grand Serkonan Guard and the contractors lost all their cargo.

On low chaos, Corvo Attano or Emily Kaldwin can come across him explaining this to Maya and her associates. As compensation, he offers them the location of a warehouse containing dried fish and spices of a value probably higher than what they lost. As the cargo was originally due to be smuggled to Fraeport but had to be abandoned, he knows it will not be claimed. After thanking him, Maya and the group agree to return tomorrow for him to take them to the warehouse.

On high chaos, Maya and her friends accuse Ramos of making a deal with the Grand Serkonan Guard himself to make a larger profit on the haul. Ramos accuses them of being "gutless merchants", and the conversation descends into an argument. Eventually, tempers running high, Maya's friends attack Ramos, who retaliates with an iron pipe, knocking both of them unconscious while Maya flees.

After the group leaves or is knocked out, Ramos spends the rest of the mission cleaning his boat and going through his supplies.

Ramos talking to Maya and her group. 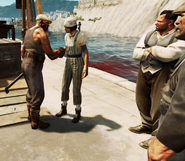 Ramos and Maya coming to an agreement. 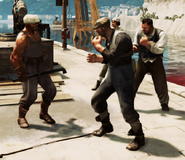 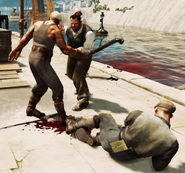 Ramos knocking out one of Maya's associates.

Ramos checking over his supplies.
Add a photo to this gallery

Retrieved from "https://dishonored.fandom.com/wiki/Ramos?oldid=148591"
Community content is available under CC-BY-SA unless otherwise noted.