The rail car (or carriage) is a whale oil-powered vehicle, which is one of several types of transport used in Dunwall and Karnaca. As with most land-faring vehicles in the Isles, cars run on rails. Based on their appearance and utilization in Dishonored, as well as the heavy guard presence at carriage stations in Dishonored 2, rail cars are likely often reserved for the most affluent and elite of Dunwall and the City Watch, as well as those loyal to Duke Luca Abele.

The standard rail car is a four-wheeled affair, each wheel of which is on a separate dedicated rail. The front two wheels each have a forward-mounted pilot, to catch and expel small objects and even rats out of the vehicle's way. Located above the front right wheel is a large forward-facing lamp to illuminate the way, as well as another smaller lamp located just above the left window.

Heavy metal doors are positioned on either side, some versions of which open outward, while others slide backwards exposing the interior. The interiors of most rail cars boast cushioned seats that face each other. Overheard illumination in the interior of the cab is provided by a fluorescent tube light bulb on the ceiling as well as small viewing ports. There are speakers set in the vehicle walls next to the seats for the passengers' entertainment.

On the roof of the vehicle is a large trunk for the travelers' use, held in place by sturdy straps. The rear of the vehicle also seems to have a heraldic symbol of some kind painted on the back plate, most often a winged bird behind a diamond shape.

The Karnacan rail car is a large, buggy-like vehicle, with a wooden carriage placed on top of a metal chassis. The Karnacan variant is also open-air, as opposed to the rail cars commonly seen in Dunwall. Two large metal wheels without spokes form the front of the vehicle, placed on the inner rails of the track, while two spoked smaller wheels are placed on the rear end. The "interior" of a Karnacan rail car has cushioned seats and a small roof for shade; beyond this, most riders are exposed to the elements.

Karnacan rail cars are fully automated, and can be set to their destination with the push of a lever. Unlike the rail cars found in Dunwall, Karnacan rail cars can manage steep inclines, thanks to the use of funicular-like cables present on the steeper sections of track found throughout the city.

Concept art for a rail car in The Art of Dishonored 2. 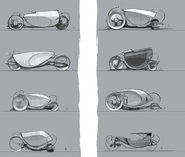 Rail car concept art in The Art of Dishonored 2.

A rail car in front of the Golden Cat.

A rail car parked outside the Boyle Mansion.

A rail car with rust on the bottom.

A rail car lies stripped and abandoned among corpses of the plague-dead.

A rail car by the riverfront.

A rail car in action.

A rail car in the background, accompanied by a tallboy and a wolfhound.

A rail car, abandoned and falling apart.
Add a photo to this gallery
Retrieved from "https://dishonored.fandom.com/wiki/Rail_Car?oldid=155511"
Community content is available under CC-BY-SA unless otherwise noted.