"It won't do you any good to bait me, officer. But don't worry, I'll be fine. I'll profit. A smart man can come out ahead, even in the time of plague."
—Pratchett

Pratchett is an aristocrat and the owner of a profitable cannery that packs and distributes foods sold around the Isles, including Dunwall and Karnaca. These foods, such as Pratchett Jellied Eels, can be consumed by Corvo Attano, Emily Kaldwin and Daud over the course of the Dishonored franchise to restore health.

Pratchett is briefly encountered on the southern end of Drawbridge Way, located on Kaldwin's Bridge, during The Royal Physician, where he can initially be seen outside his home arguing with an Officer about the bridge's curfew, and commenting that a "smart man" can make money even in a time of plague. Afterwards, Pratchett enters and walks around his home.

Pratchett in his home. 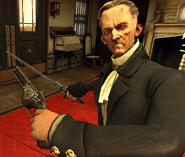 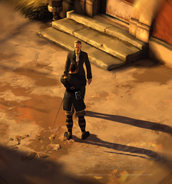 An advertisement for Pratchett Jellied Eels.

An advertisement for Pratchett's warehouse. 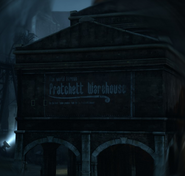 An advertisement for Pratchett's Warehouse, found in the Estate District. 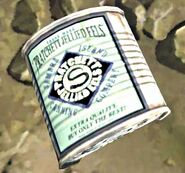 A can of Pratchett Jellied Eels.
Add a photo to this gallery

Retrieved from "https://dishonored.fandom.com/wiki/Pratchett?oldid=167695"
Community content is available under CC-BY-SA unless otherwise noted.