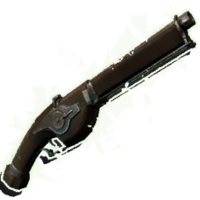 Pistols are one of the main weapons in the Dishonored franchise. The pistol fires a small projectile via the explosion of a miniature whale oil tank.

In Dishonored, Corvo Attano can obtain a City Watch pistol during his escape from Coldridge Prison. Once Corvo purchases a new pistol from Piero Joplin, it can be upgraded with better accuracy, a revolving chamber, and faster reload speed, among other things.

In The Knife of Dunwall and The Brigmore Witches, Daud can collect the pistol from the bodies of dead or unconscious City Watch Officers. He cannot acquire upgrades for it.

In Dishonored 2, the pistol is collected from the Imperial Safe Room in Dunwall Tower. If Corvo is the protagonist, his pistol and mask are located just to the left of the door out of the Tower. His pistol functions the same as it does in Dishonored with no upgrades equipped. If Emily Kaldwin is the protagonist, her pistol and spyglass are located in the same place. Despite being aesthetically different, it functions the same as Corvo's.

The pistol has two ammunition types: Standard and Explosive. Explosive bullets cannot be manufactured until the protagonist brings Piero (in Dishonored) or a black market shop (in Dishonored 2) the Small-Scale Combustion Refinement Blueprint. Meanwhile, upgrades can also be purchased to improve the bullet's performance in different situations.

The pistol is the less subtle of the two ranged weapons, as its loud noise is easily heard by any hostile in the vicinity. In combat, however, its power is substantial, as it is capable of killing a City Watch guard in one shot.

Combining the pistol with Bend Time allows Corvo and Daud to fire multiple rounds, even with few upgrades, and kill several opponents at once. Throwing a whale oil tank and then shooting it with the pistol will cause a massive explosion, which can kill multiple guards and even down a Tallboy. Tossing a grenade and then shooting it will send it flying farther than a normal throw.

Corvo's Pistol is a redesign of the City Watch Pistol, built by Piero Joplin, and designed to accept a number of modular upgrades. Purchasing Corvo's Pistol will unlock the Pistol Accuracy, Pistol Magazine, and Pistol Reload upgrade tracks. Corvo can buy this pistol without obtaining a standard City Watch Pistol.

In addition to accepting upgrades, Corvo's Pistol has a short-range spread-damage effect, which can wound multiple opponents in close proximity.

After building Corvo's Pistol, Corvo can pay to improve the pistol's accuracy and shot deviation, with the final upgrade rendering the weapon near-pinpoint accurate. The first upgrade gives the pistol ironsights. The second upgrade attaches a rod with a small sliding weight to the bottom of the pistol.

The Magazine upgrades add additional rounds to Corvo's Pistol that he can fire between reloads. Each upgrade adds another shot to the pistol's magazine, up to a total of four shots between reloads. The upgrade puts a "belt" of bullets on top of the receiver of the gun, adding one more bullet to the chain with each upgrade.

Each pair of pistol Masterwork upgrades are mutually exclusive, as well as unique to that character.

With this upgrade, Corvo's pistol is perfectly accurate when the zoom function is active and furthermore suffers from no recoil, permitting long-distance rapid-fire. The area of effect damage is reduced, making this pistol less helpful for close-quarters fighting. Visually, Corvo's pistol receives a large telescopic sight on top of the barrel.

Conversely to the above, this upgrade effectively neutralizes the pistol's long-range capabilities, effectively turning it into a shotgun, with improved area of effect damage, increased bullet fragmentation, and heightened overall damage. This pistol can kill multiple enemies in close proximity with one shot. Visually, Corvo's pistol receives a vented muzzle brake on the front of the barrel.

With this upgrade, Emily's pistol fires three bullets in a burst. This kills most enemies instantly, and if Emily quickly moves the aim, it can damage multiple. It is very effective against groups of enemies, doing damage to lots of them in a short time. However, the area of effect damage has a shorter range. With the Magnetized Bullet upgrade, this pistol can safely take down Clockwork Soldiers. Visually, Emily's pistol has its magazine shortened by one bullet, and receives a finned assembly on the muzzle.

Emily's pistol becomes rapid-fire, never needing to reload. This is very helpful when facing lots of enemies, as the trigger can be pulled and left, quickly dispatching them all. However, it does tend to use Emily's bullets quite quickly, so care must be taken not to use too many. Visually, Emily's pistol has its magazine replaced with a belt-feeding device and extra components on the reloading device near the front of the receiver.

Concept art of the pistol.

An Officer firing his gun. 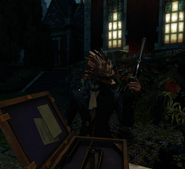 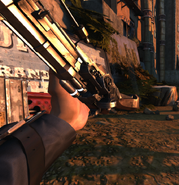 Corvo shoots a guard off a ledge with his pistol.

Corvo's pistol at the beginning of Dishonored 2.

Pistol concept art.
Add a photo to this gallery

Magazine 3.
Add a photo to this gallery

The Crimson Painter (Masterwork).
Add a photo to this gallery

The Insistent Gentleman (Masterwork).
Add a photo to this gallery

Retrieved from "https://dishonored.fandom.com/wiki/Pistol?oldid=166475"
Community content is available under CC-BY-SA unless otherwise noted.