"He is Piero Joplin. Even now he visualizes the next invention - astonishing. I wish you could see it too."
—The Heart[2]

Piero Joplin is a natural philosopher, an inventor (whose creations include an anti-plague potion known as Piero's Spiritual Remedy, Corvo's Mask, and later, an advanced Arc Pylon) and a member of the Loyalist Conspiracy who resides above the workshop at the Hound Pits Pub. Throughout Dishonored, Piero supplies Corvo Attano with ammunition and equipment upgrades, provided Corvo has the required coin to purchase them. He also designs and constructs Corvo's mask, which he gives to Corvo upon their introduction.

Piero is the youngest person ever to graduate from the Academy of Natural Philosophy, which irritated the Head of the Academy, Anton Sokolov. At an indeterminate time prior to the events of Dishonored, Sokolov played a part in expelling Piero from the Academy, creating a fierce rivalry between the two. Piero believes that if it weren't for Sokolov, he would be a Senior Fellow at the Academy. He also suggests that Sokolov stole several of his inventions, including his elixir formula.

Before creating Corvo's mask, Piero was visited by dreams of a boy dying. The dreams distracted him, making his work impossible. He then began dreaming of the Void, where he encountered what he believed to be death. Inspired by his dream of the Outsider, he began work on the mask that would later be presented to Corvo. Before completing the mask, Piero also created Corvo's crossbow and sword, which Corvo acquires in the sewers.

According to the Heart, the Outsider continues to visit Piero at night, giving him ideas for new creations in his dreams.[3] An audiograph found on Piero's desk suggests that the Heart itself is one of these creations.

Piero and Sokolov ultimately reconcile their differences while under siege from Farley Havelock's men. In the low chaos ending of Dishonored, the two combine their efforts and develop a cure for the rat plague.

An illustration of Piero found in the tutorials section.

Another view of Piero.

Piero inside his workshop. 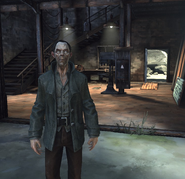 Piero outside of his workshop.

Piero leans against a wall. 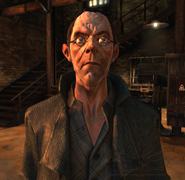 Piero and Sokolov in the workshop.

Piero and Sokolov, after reconciling their differences. 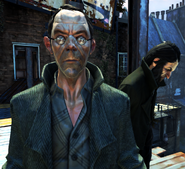 Piero on the ramp leading to Emily's tower.

Piero and Sokolov curing the plague.