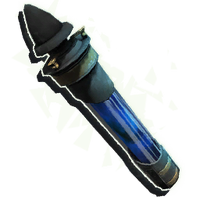 Piero's Spiritual Remedy is the second of two anti-plague elixirs to have been created, the other being Sokolov's Elixir, and it is named for its creator, Piero Joplin. It is succeeded by the Addermire Solution.

When used by Corvo Attano and Daud, it revitalizes the mana required to perform their supernatural abilities.

An editorial written by Piero attributes the mana-restoring power of the elixir to its ability to "revitalize the mind," as opposed to Anton Sokolov's, which only heals the body.

A vial of Piero's Spiritual Remedy in a cabinet.

Light up keychain with Piero's Spiritual Remedy and Sokolov's Elixir, given away at the Dishonored booth of E3 2016.
Add a photo to this gallery

Retrieved from "https://dishonored.fandom.com/wiki/Piero%27s_Spiritual_Remedy?oldid=159559"
Community content is available under CC-BY-SA unless otherwise noted.