"Paolo. He helped a blind woodcarver cross the street the same day he assassinated a barrister."
—The Heart[1]

Paolo is a character in Dishonored 2 and the leader of the Howlers gang in Karnaca.

Paolo intends to seize Karnaca from Duke Luca Abele in order to reinstate peace, even at the cost of innocent lives. He sees himself not as a criminal, but as a man of the people with a justified cause. The Duke and the Grand Guard are for him symbols of corruption and tyranny at the heart of the city.

During this time, Paolo somehow obtains the disembodied left hand of Vera Moray. This grants him a degree of her immortality, transforming him into a swarm of rats whenever he is fatally injured and reforming him elsewhere unharmed. Unlike with Vera, this supernatural power only works once a day with Paolo; if he is killed twice before sundown, his death is permanent.

Rumors of Paolo possessing an artifact of black magic attract the attention of the Abbey of the Everyman, who send Vice Overseer Liam Byrne and a group of Warfare Overseers to stop the gang leader from using the unknown curio. Both the Howlers and the Overseers then engage in a violent dispute over territory in the Dust District.[2]

Paolo can be first seen during the mission The Clockwork Mansion, entering a black market shop and complaining to the owner about the quality of knives he bought there. If the meeting is not disturbed by Corvo Attano or Emily Kaldwin, Paolo will leave the shop and go to a nearby alley, where he spends the rest of the mission.

During the mission Dust District, Paolo is a potential ally and can help the protagonist to solve the Jindosh Riddle in order to enter Aramis Stilton's mansion. However, the body of Paolo's nemesis, Vice Overseer Byrne, must be delivered to him first. Alternatively, Paolo can be neutralized by being placed in a crate found in the silvergraph store where he will be shipped off to Karnaca's silver mines for five years of servitude, killed and delivered to Byrne to gain the latter's assistance, or both men can be ignored completely.

Eliminating Byrne by any means and leaving Paolo untouched results in the Abbey withdrawing from the Dust District and the Howlers gaining control, then expanding their influence throughout Karnaca. Eliminating Paolo leads to the opposite outcome, with the Howlers becoming disorganized and the Abbey gaining power. If both Paolo and Byrne are exiled, both the Abbey and the Howlers are significantly weakened in Karnaca, and the Grand Guard peacefully reasserts its authority in the Dust District in their absence. 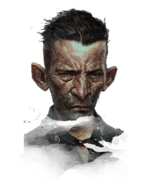 A wanted poster for Paolo in the Dishonored 2 gameplay trailer.

Paolo in the Dishonored 2 gameplay trailer.

Paolo standing over a captured Overseer.