Outsider Shrines are altars dedicated to the Outsider that can be found throughout the world of the Dishonored franchise. They can be found in optional areas, most commonly abandoned apartments or structures. Runes are located at each shrine, making the Heart a useful tool for finding them.

Most missions in Dishonored contains one shrine for Corvo Attano to visit. The Knife of Dunwall contains one functional shrine for Daud to visit during the Eminent Domain mission, while two shrines can be found in The Brigmore Witches during the mission The Dead Eels.

In Dishonored and its DLC, the Outsider speaks to Corvo and Daud at each of these shrines, usually revealing interesting facts about targets, people, or events occurring in the current mission. In Dishonored 2, each shrine acts as an access point to the Void when Corvo and Emily Kaldwin visit them.

Five characters are known to have visited these shrines and used them to communicate with the Outsider: Corvo, Granny Rags, Daud, Emily and the Lonely Rat Boy. 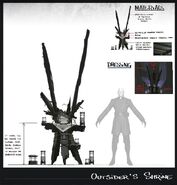 Concept art of the shrine.

A shrine floating in the Void.

An Outsider shrine in the Void.

A shrine in the Void.

Granny Rags's shrine behind her house.

Granny Rags in front of her Outsider shine.

The Mad Survivor's shrine in his apartment.

Granny Rags' shrine in her lair.

A shrine in the Estate District.

A shrine-like area in the Legal District.

A shrine in the Legal District.

A shrine at the Riverfront in Drapers Ward.

An Outsider shrine in the Drapers Ward Sewer System.

Emily in front of a shrine in Dishonored 2.

An Outsider shrine in Dishonored 2.