Informally known as the "Blind Sisters", the true culture surrounding the Order remains a secret to the non-initiated. These "intellectually curious" and "ruthlessly analytical"[1] women spend their time studying history and politics, using the knowledge they have gained through their academic pursuits to make decisions, as well as enriching their understanding of these topics by debating them among themselves. In truth, the Sisters are believed to have prophetic visions, which together with their vast knowledge, are used to guide the Abbey of the Everyman. Once an advice is given by the Order, it is endorsed with "complete confidence" by the High Overseer.[1]

Like the Overseers, the Sisters of the Oracular Order are trained in combat, wielding "maces, terminating in a single open eye",[1] and hyperbaric grenades. Their heavy attacks deal high damage, and if blocked, stagger opponents, making them vulnerable to assaults from other sisters. Even though blindfolded, they can also skilfully deflect projectiles with their maces.

The Oracular Order was formed in the 1700s shortly after the Rectification War, as the predictions of Gwen Horncroft led to a decisive victory for the forces of the Abbey led by Benjamin Holger (who was unfortunately slain in battle at Whitecliff). Ever since its foundation, the Oracular Order has provided critical insights vital to the Abbey of the Everyman.

In Karnaca, the capital of Serkonos, the Oracular Order has a more elevated role compared to the Abbey, due to the hubris of the Serkonan Overseers leading them to fall out of the favor of the High Overseer in Gristol. While the Order maintained good relations with Theodanis Abele, a chasm has grown between them and the new duke, Luca Abele.[2]

Eventually, the Order was disbanded along with the rest of the Abbey in the Spring of 1853 as part of a larger crisis due to the appearance of Void Rifts across the Empire. Their chapels across the Isles were stormed, and many of the sisters were hunted down and killed by a faction of the Imperial forces.[3]

Just as the Overseers of the Abbey are led by a High Overseer, the Order is headed by a High Oracle. The process by which this leader is selected remains a secret of the Oracular Order. The location of this unnamed individual is kept hidden as well, some even believing that she does not stay in one single place, but travels among the various chapels of the Isles.[1]

Decisions are made during a Cloistered Gathering, a practice none besides the Sisters are permitted to observe. A room is prepared with heavy incense and blessings from the Strictures in a circle sit thirty or more Sisters until the room is completely packed. No topic will be heard until every Sister has time to research. Several outcomes are discussed and some Sisters are tasked with advancing less popular or unlikely scenarios. At which point every Sister voices her opinion, as none are permitted to be silent. It may take some time but by the end every Sister is quite versed in the myriad consequences and may have lengthy advice for all contingencies. When an opinion is written, it may be as short as a sentence or fill twenty pages, yet even then the High Oracle must approve it.

The Oracular Order is known to perform a rite of passage similar to the Abbey's Trials of Aptitude on specific marked children and adults. This ceremony lasts a month, and while succeeding initiates are accepted into the Order, it is a well-guarded secret as to what happens to failures.[2]

In a letter written by Teague Martin, he claimed an Oracular Sister saw the following vision and concluded that it's about the Royal Interrogator, Morris Sullivan:

In 1851, High Oracle Pelagia Themis asked Sister Kara to perform a Ritual of Prophecy in order to detect any heretical influence that seeks to distort the Order's prophecies. The plan worked, confirming Themis' theory, as an inexperienced Kara was transfixed and almost killed by a twisted vision:

The Sisters of the Oracular Order can be spied upon through the Oraculum during the mission The Royal Conservatory. The device can be used three times to hear their prophecies:

During the mission The Stolen Archive, prophecies from the remains of the Blind Sisters used for the Oraculum can speak more prophecies if the censers in the room are broken:

Lena Rosewyn also recorded her own prophecies in a book, which can be found in the elevator of the Royal Conservatory. The entries in the book are as follow:

Lena Rosewyn, a sister of the Oracular Order.

Sisters meditating on the Conservatory's terrace. 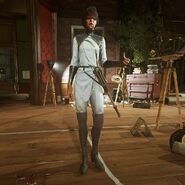 An Oracular Sister in the former Curator's office.

An Oracular Sister wielding her mace.

Render of the mace weapon.

Render of the mace weapon.

Concept art of the Order's attire and blindfold.