The Old Whaling Ship Hulks is a location in Dunwall, downriver of the city. These discarded Whaling Trawlers have become a hideout for criminals. They serve as the final setting of the fourth issue of Dishonored: The Wyrmwood Deceit

At one point during the Empire's industrial revolution, several decommissioned whaling ships were gathered and anchored down the Wrenhaven River to be scrapped down, one of them still containing the remains of a whale. However, the company owning them went bankrupt long ago and the ships were left to rust in the elements. Over time, criminals started using them as hideout, away from the Wrenhaven River Patrol.

Around 1850, Broken Tom, an agent of the Wyrmwood Witch, used the hulks to lure Corvo Attano and kill him. The ships were guarded by the Dead Eels gang. 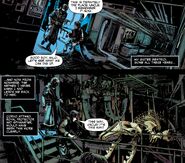 Inside one of the hulks.

Corvo fighting Dead Eels on one of the hulk's bridge.

The beached trawler outside the Greaves Refinery.
Add a photo to this gallery
Retrieved from "https://dishonored.fandom.com/wiki/Old_Whaling_Ship_Hulks?oldid=162149"
Community content is available under CC-BY-SA unless otherwise noted.