The Old Waterfront is an industrial area of Dunwall along the Wrenhaven River. In the years following the end of the Rat Plague, it became the training ground of the Royal Protector and Spymaster Corvo Attano and his daughter Empress Emily Kaldwin. It is visited during the tutorial of Dishonored 2, Memories of Training.

The Old Waterfront is located east from Drapers Ward and near the Estate District, with the Clocktower looming close. The district has mainly red brick buildings with for some tall chimneys, and narrow alleys separating them in rows. There are a least a canal and an aqueduct assuring the water flow between the factories and the river. A fishery can be found on the riverside, where workers process both fish and whales in its yard, and a small distillery nearby. Whaling trawlers are anchored close to the waterfront.

Between 1837 and 1852, Corvo took Emily to the Old Waterfront to train her, in order for her to avoid the same fate as her mother Jessamine. Taking advantage of the emptiness of the district by night, he prepared for her a training course to improve her natural abilities, such as her mobility, stealth, crossbow and sword skills.

Shortly after the Dunwall Coup in 1852, the Rat Gang used an abandoned wharf at the end of the waterfront as hideout.

The riverside, with the Clocktower in the foggy distance.

A misty alley near the canal.

The canal between factories.

Factories in the Old Waterfront.

The end of a wooden aqueduct. 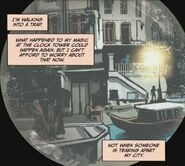 The Rat Gang hideout as spied on by Emily.
Add a photo to this gallery
Retrieved from "https://dishonored.fandom.com/wiki/Old_Waterfront?oldid=161011"
Community content is available under CC-BY-SA unless otherwise noted.