The Offices of Dr. Galvani is both the home and the workplace of Doctor Galvani. The mansion is located along John Clavering Boulevard in the Distillery District.

Inside, Galvani maintains a laboratory on the third floor, where he studies the plague and the rats that spread it. There are workstations for different purposes throughout the area, and Galvani's desk is also on this floor. The doctor also has a secret room behind a bookshelf in his lab, where he must keep his plague rat research due to the ban on vivisection.

Dr. Galvani keeps his specimens in the pantry on the first floor. Also on the first floor are the servants' quarters, the kitchen (which is divided into two sections – one for food preparation and the other for cooking), and the foyer, containing glass cases with various objects on display.

On the second floor is Galvani's apartment, consisting of a bedroom, a living and dining room, and a few smaller rooms off to the side. In the dining room, there is also a small safe in the corner.

The building is featured in two side objectives, both concerning Slackjaw and his Bottle Street Gang. Corvo Attano has the chance to visit the building during the missions High Overseer Campbell and House of Pleasure.

A severed arm at the threshold of the rat pantry.

Bunk beds in the servants' quarters.

A lounge on the second floor. 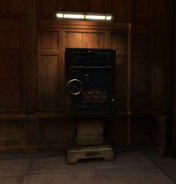 Galvani's safe on the second floor.

Another portion of Galvani's lab.

Lab space at the Galvani Residence.

Lab space at the Galvani Residence.

Chalkboard showing whale and safe combination at the Galvani Residence.

Red room on the third story of the Galvani Residence.

Entrance to secret room at the Galvani Residence.

A rune in the secret room at the Galvani Residence. 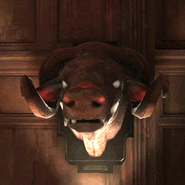 A mounted blood ox head at the Galvani Residence. 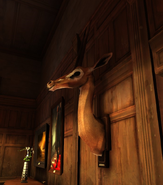 A mounted gazelle head near the entrance.

A painting of Dunwall at the Galvani Residence.

A painting of Kaldwin's Bridge at the staircase to the top floor.
Add a photo to this gallery
Retrieved from "https://dishonored.fandom.com/wiki/Offices_of_Dr._Galvani?oldid=155809"
Community content is available under CC-BY-SA unless otherwise noted.