Nest Keepers are living hosts to bloodflies. The parasites lay eggs into their bodies and force them to protect the nests. Even without their limbs, the parasites will force the Nest Keepers to pursue intruders. Upon death, the hosts' corpses will release a swarm of bloodflies.[1]

Nest Keepers have an unhealthy, mottled, grey tone and their skin has taken on a bumpy, leathery texture. A Nest Keeper's eyes are discolored, and their teeth are rotten and decayed. Their hair is missing, their nails are blackened, and they are dressed in the remnants of whatever clothing they had on when they were turned.

They fuss over the bloodfly hives, ensuring they are safe, and will aggressively attack those who are perceived as threats. If they receive significant damage, they will rip apart at the torso, releasing a fresh swarm of bloodflies. 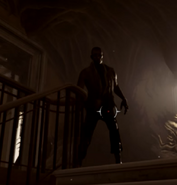 Claudio wanders his apartment as a Nest Keeper.
Add a photo to this gallery

Retrieved from "https://dishonored.fandom.com/wiki/Nest_Keepers?oldid=161282"
Community content is available under CC-BY-SA unless otherwise noted.