"This is the second time now. I see something or someone out of the corner of my eye, but when I turn... they're gone. Someone is watching us."
—Thomas, reporting to Daud at the Drapers Ward Riverfront.

Naria is a minor character featured in the Dishonored DLC, The Brigmore Witches. She appears during the mission The Dead Eels.

She also developed extraordinary stealth skills. She used these abilities as a scout to spy on various enemies of her coven.

While the details of her life before joining the coven are unknown, Naria was apparently of a high enough station that she was able to associate with the likes of both Thalia Timsh and Waverly Boyle. She attended the seance with Waverly, Thalia, and Arnold Timsh during which Delilah appeared.

Shortly before Daud's arrival at Drapers Ward, Delilah sought to have the gangs known as the Dead Eels and the Hatters war against each other. It was her hope that the chaos would occupy Daud's time, making him unable to come after her at the Brigmore Manor.

To this end, Delilah dispatched a small group of her more powerful witches to the area, sending Naria to the Drapers Ward Riverfront. Her job was to observe the Dead Eels and their ship, the Undine, and alert her sisters to any important events, such as Lizzy Stride resuming command.

Naria on the roof of a building. 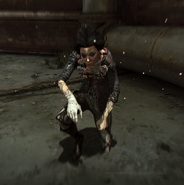 Naria kneels on the ground.

Daud sneaks up upon Naria from behind.

Naria takes out her sword.

Naria being killed by Daud.

Naria lies slain.
Add a photo to this gallery

Retrieved from "https://dishonored.fandom.com/wiki/Naria?oldid=147738"
Community content is available under CC-BY-SA unless otherwise noted.