Mystery Foe is a stealth challenge in Dunwall City Trials. The aim is to identify and kill a target randomly selected in the level while avoiding detection.

"Collect the four clues without being detected to discover who your target is and execute him or her."

The challenge is set inside a mansion filled with guards and civilians, along with several dimensional portals. A random mystery target is then assigned to the player, and they must figure out who the target is by collecting clues hidden throughout the house. The mansion resembles the Dunwall Tower interior; however, it has many significant changes.

Killing an innocent or letting the target escape into one of the portals results in a game over.

Like the target, the locations of the clues are randomized. It is best to use the chandeliers and doors near the ceiling to move from room to room.

Possession is very useful for this challenge. Whether the player uses it to possess a rat in order to sneak or escape, or a person to collect a clue, it can be an invaluable tool.

To get 3 stars, the player does not have to get the lucky guess bonus.

The player gets more points for avoiding guards than for knocking them out.

Extra points are granted for the bonus goals: 'Ghost' (not being seen), 'Very Fast' (killing the target in under a certain amount of time), and 'Lucky Guess' (killing the target with fewer than four clues). Even though all of these goals can be obtained by repeatedly walking into the nearest room and killing a civilian until getting lucky, this is not enough to get all three stars; it is required to collect at least some of the clues.

Even if the player does not get spotted, if someone hears or sees something, they will not get all the points.

When the player kills the target near an other character, it may count as a body that was spotted, and they will lose points. There are three solutions :

One of the dimensional portals. If the player is detected, aristocrats will exit the map through here.

One of the bedrooms, containing a guard and courtesan.

An aristocrat in Mystery Foe wearing the same mask as Lord Shaw.

The courtesan's makeup room. Another clue can be found here.

An office, with a guard and aristocrat.

The main hallway, directly left of the spawn area.

A view of the Void from bedroom window.

A map of the level.

Achieving 3 stars with all four clues.
Add a photo to this gallery 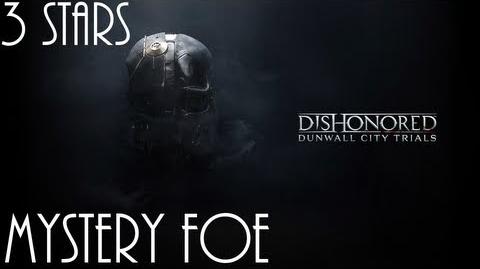 Retrieved from "https://dishonored.fandom.com/wiki/Mystery_Foe?oldid=141803"
Community content is available under CC-BY-SA unless otherwise noted.