"The doctor is a brilliant man. If anyone can save this city, it's him."
—Ms. Benton's view of Galvani, her employer

Ms. Benton is a maid who works at the Offices of Dr. Galvani. She appears in Dishonored during the mission High Overseer Campbell.

Ms. Benton is very happy in the employ of Doctor Galvani, viewing him as a brilliant man, though she doesn't understand his admiration of Anton Sokolov. She trusts Galvani, accepting that, when he left Dunwall for a few days during Dishonored, he would indeed pay her missing wages as he said so in a note. She also accepts that Galvani knows things she never can, especially in relation to the rat plague.

While in service at Galvani's manor, Ms. Benton became very close to a guard assigned there. She is due to marry him at some point after the mission High Overseer Campbell.

When Corvo Attano first arrives at Galvani's offices, Ms. Benton is informing her fiancé that, as he has touched the door handle to Galvani's laboratory, he needs to wash his hands. Her fiancé reluctantly acquiesces, then goes on to ask Ms. Benton what Galvani does with his time, telling her that his friends Ambrose believes Galvani breeds plague rats. Ms. Benton tells him that Ambrose is ignorant and that Galvani will cure the rat plague and save the city. Her fiancé again disagrees, saying it will be Sokolov who does this. When Ms. Benton talks insultingly about Sokolov, her fiancé walks off, annoyed at the argument.

Ms. Benton's fiancé heads upstairs to patrol the third floor, while Ms. Benton goes to check on Galvani's bedroom and his dining room. Afterwards, she goes to join her fiancé upstairs. At some point up there, her fiancé asks her if she's seen Galvani open the safe on the second floor. She rebukes him, but he goes on to wonder about what would happen if Galvani died of the plague. After this, both go about their own business. 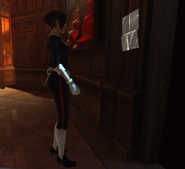 Ms. Benton reading the note left for her by Doctor Galvani.

Ms. Benton speaks with her fiancé.

Ms. Benton talking with her fiancé. 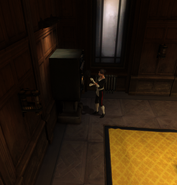 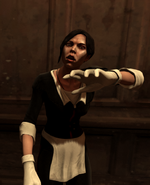 Ms. Benton being scared by Corvo.