"My father lost it all when I was a boy. So now I wear this uniform and I send twenty-year-olds out to patrol the Rose Gardens instead of drinking with the men from the Shooting Club..."
—Ramsey reveals his motivation to a weakened Emily Kaldwin

Mortimer Ramsey is an aristocrat and an Officer of the Watch in Dishonored 2 and Dishonored: The Corroded Man. He is secretly loyal to Delilah Copperspoon and Duke Luca Abele.

Mortimer's family, the Ramseys, are Baronial Peers of Gristol, a noble family of low status among Dunwall's aristocracy.[1] They used to have a good reputation, even hosting once the King and Queen of Morley. Ramsey even grew up among the children of the Buntings and the Boyles, both Landgrave Peers. However, his father's actions made the family fell from the aristocracy when he was a boy, something Mortimer felt as an injustice. To add to his resent against his father, Ramsey was sent to work for the Dunwall City Watch, "one step above begging" in his own words.

Mortimer Ramsey never achieved more than the rank of Captain of the Watch. As the First Officer of the Night Watch, he still had to work the streets, which he felt unbecoming of his lineage. He was some times called to work under direct command of the Empress and for so was granted special authority. However, that would still put him in conflict with the Royal Protector and Spymaster, Corvo Attano.

Ramsey had contempt for anyone of lowly birth or foreign extraction with the same authority or more, such as Captain Alexi Mayhew and Corvo Attano. He also held a grudge against the Empress herself, Emily Kaldwin, for disrespecting him and doing nothing to restore his family's name among the nobility. He was however inquisitive enough to learn from the Tower Guard about the Empress's room and the wealth in gold it contains.

In 1849, Mortimer Ramsey was approached by Delilah Copperspoon and her allies after her return from the Void. The middling Captain was swayed by her claim to the Imperial throne and, like her, believed Emily to be an usurper. Ramsey also saw an opportunity to restore his family's standing through power and wealth, and even become the next Royal Protector. And so the traitor secretly entered the Duke's Inner Circle and was even privy to the identity of the Crown Killer. He then spent the next three years secretly rallying other members of the Watch to the witch's cause, either through bribery or threat.

In the Month of Darkness, 1851, Captain Ramsey served as liaison with the City Watch to coordinate the search of the new Whalers gang and keep watch other the cemeteries the graverobbers could potentially target. This search was to be kept hidden from the population as to not seed unrest.

After the repelled assault of the Whalers on Brigmore Manor, the Empress summoned the leaders of the search operation in order to dictate a full lockdown of the city until the threat was suppressed. The Officer replied that the City Watch alone was not enough to enforce it, and suggested to call the Gristol army in reinforcement, albeit at the cost of agitating the population. Both he and Commander Kittredge were then left in disbelief when the Royal Spymaster suggested to not take any new measure. They both voiced their disapprobation in letting Corvo Attano and his spies handle the security at the coming Boyle Masquerade while using it to set a trap for their adversaries. The Captain of the Watch was particularly bitter at the Royal Spymaster for refusing to share some of his agents' information. The Empress conceded in the Spymaster's plan and gave him command over the City Watch and the Wrenhaven River Patrol for this operation, then dismissed Ramsey and the rest of the attendance.

On the 15th anniversary of the death of Jessamine Kaldwin, Ramsey was in charge of the ceremony's security detail at Dunwall Tower. This gave him the opportunity to prepare the ground for Delilah's Coup from within and without the palace. He gave covert orders to isolate it and its vicinity and for his men to stand ready to cooperate with the Duke's backup of 100 guardsmen. He also successfully hid from Corvo the presence of Delilah and Clockwork Soldiers among the Duke's entourage coming to pay his respect to the late Empress.

At the ceremony, Mortimer Ramsey is on duty announcing visitors coming to pay their respects at the Throne Room. Before the ceremony ends, the Captain of the Watch reveals to Emily the coming of the Duke of Serkonos bearing "special gifts". After Delilah reveals her intentions, he incapacitates Emily and catches Corvo's Folding Blade thrown to him by Delilah. He then knocks out either Emily or Corvo and drags them to the Empress's chambers to be locked out before he can bring them to Coldridge Prison.

Ramsey is interrupted by Captain Mayhew who was alerted by the commotion inside the Throne Room. The traitor viciously stabs his former colleague with Corvo's blade and leaves her for dead. He then gloats to his semi-conscious captive about his next plan: while the Duke's party is gone, Ramsey and a few loyal men are going to pilfer the Safe Room's gold for themselves. He then steals his prisoner's Imperial Signet Ring, the only key to the Safe Room, and locks them up in the chamber. With two of his men standing guard in the Empress's apartments, Ramsey goes back to the Throne Room to order the rest of them to keep watch for any disturbance to their theft.

After Emily or Corvo escape from the room, they need to recover the Imperial Signet Ring from Ramsey in order to escape. They can either kill the traitor or knock him out. If they choose the latter, they will have to lock him up in the Safe Room to buy them time for their escape through the room's secret exit. When left to his own devices, Ramsey will head up by himself to the Safe Room to contemplate his future. Surrounded by "enough gold to buy an island", he finally sits down and lights a cigar. His death or disappearance will have been noted by the Duke's men as soon as Corvo or Emily reach the streets of the Tower District.

If Ramsey was imprisoned in the Safe Room, he will have spent at least 12 days locked up there. With enough food to last a month and a mountain of gold he couldn't spend, the traitorous Captain of the Watch started writing an improvised diary. His imprisonment quickly got reason of his patience and sanity to the point of groveling to Delilah and the Duke to be set free. He turned the room over for an exit, even finding the door to Jessamine's hidden chamber downstairs, but was still unable to open it without the Imperial Signet Ring. He was eventually found out by the palace's new occupants. However, Delilah did not forgive him for failing to guard Emily or Corvo, and turned him into stone. And so on the last mission, Mortimer Ramsey's petrified body can be found in the Safe Room, caught as he was reaching for the gold in one of the safes. 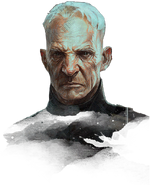 Ramsey is turned to stone.