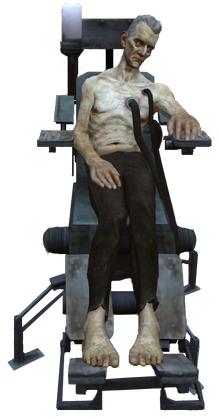 Mortimer M. Hat, or the Geezer, is a character found in The Brigmore Witches. He is the leader of the Hatters and is encountered at the Drapers Ward Textile Mill.

Hat is very old and has "been around since before the Kaldwins".[1] Lizzy Stride mentions that Hat is 100 years old. Among the uninitiated, little is known about the man, apart from the fact that he was already a ruthless gang leader in his early years.

It was not until the reign of the Kaldwins that he took part in a group of investors to reinvent Drapers Ward, a rundown clothing manufacturing district. Along with merchants such as Percy Oliver and Agatha Chesney, Hat started selling high end clothing to Dunwall's elite in the new Drapers Ward. This lucrative business helped him ascend the social ladder, while still keeping control of the Hatters gang to protect his interests. However, such a project was expensive and investigations arose over the sources of his funding and his involvement with his gang.

His shady past was eventually leaked over time, when it was discovered that his workers were subjected to cruel conditions and forced to work excessively, all under the watch of his thugs.[2] He lost favor among the aristocracy after the crash of Drapers Ward in the first year of the rat plague.[3] He still maintained control over the district, even after it was abandoned by most of its inhabitants and patrons, and started manufacturing the sheets used by the City Watch to handle plague victims. This source of income was threatened when the flow of the Millenary Canal stopped, forcing the Hatters to steal the engine coil of the Undine from Edgar Wakefield, newly appointed chief of the Dead Eels Gang, to use as a replacement for the water mill.

The Geezer is kept alive well past his years by Nurse Trimble using a series of machines - designed by Trimble, himself - that are attached to his body by tubes along with "infusions of whale oil and the application of electrical impulses."[4]  He is treated as a test subject, as the machines are meant to extend his life "indefinitely."[4] Hat is no longer able to walk and is confined to a chair in his office,[5] located in the Drapers Ward Textile Mill. He is very limited in his ability to talk and only speaks freely when Trimble is not present.

At some point prior to the events of The Brigmore Witches, Hat gave the door code to the textile mill to Lizzy Stride, though she never used it. If Daud chooses to fulfill Hat's last request and remove the oil tank that powers his life support machines, Hat will spend his last moments reminiscing about her. 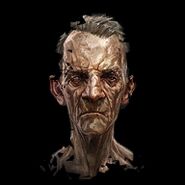 The Geezer's portrait as an assassination target.

The Geezer hooked up to his life support.

The Geezer resting in his chair while Nurse Trimble attends to his machines.

The Geezer in his chair.

Closer view of the Geezer in his chair.

The Geezer and Nurse Trimble.

The Geezer makes his last request. 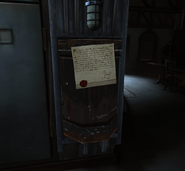 Note about the toxic vapor.

Hat dies as the toxic vapor is released.

Pre-release photo of Trimble and the Geezer.

Render and textures of Mortimer's chair. 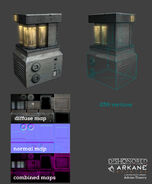 One of the machines keeping the Geezer alive.