"When you were here, we made them scream, didn't we?"
—Granny Rags, remembering times spent with Sullivan[1]

Morris Sullivan, also known as the Royal Interrogator, Royal Executioner and the Torturer, is an optional secondary target during Corvo Attano's assassination of the Lord Regent in the mission Return to the Tower.

Morris Sullivan was born to a wealthy family that, in fear of diluting their blood with that of outsiders, married cousins for generations.[2] Growing up on Endoria Street, he grew to be large and strong, developing a temper and a cruel streak toward animals,[3] but his brain remained underdeveloped.[4]

In 1811, he met Vera Moray, becoming her apprentice even before her transition into Granny Rags,[1][5]. He displayed a great deal of interest in her carving of runes,[6] and eventually, through the Apprentice power, she gave him access to some supernatural abilities.[citation needed] He kept these hidden from most and – staying true to his cruel nature – Sullivan became the Royal Interrogator at Dunwall Tower, serving as both a torturer and an executioner.[7]

Sullivan is a sadistic mute who lives in the basement of Dunwall Tower with his pet wolfhound. He is also a devout worshiper of the Outsider. Sullivan is first encountered in the mission Dishonored in Coldridge Prison, where he tortures Corvo by burning him with a hot iron. Later, in his lair at Dunwall Tower, Sullivan can be witnessed repeatedly beating a corpse hanging from a meat hook.

According to a note found in Dunwall Tower, Sullivan has a habit of watching the guards while they sleep. He also takes their possessions, leaving strange items, such as teeth or rat heads, in their place. One of the Officers refers to him as a "walking freak show".

Sullivan is one of the toughest enemies in Dishonored. His powers make him immune to most of Corvo's supernatural abilities, such as Bend Time, and he possesses the ability to pull Corvo towards him. His thick skin makes the sword, crossbow and spring razor less effective, and he is completely immune to sleep darts; he is also immune to frontal fatal attacks, but not Possession. Contrary to his passive ability, his attacks are somewhat simple; he swings a heated metal bar like a sword, and while he can block, dodge, and kick, his skill at doing so is noticeably poor compared to other enemies. However, his exceptional health allows him to deal a lot of damage to Corvo before he can be dispatched. It is recommended to use stealth to eliminate him. Alternatively, four shots from a fully upgraded pistol can eliminate Sullivan.

Closeup render of the Torturer. 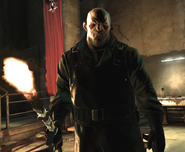 Sullivan in the interrogation room. 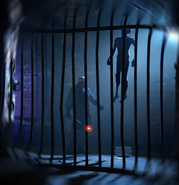 Morris Sullivan maims a corpse on a hook. 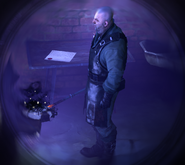 Sullivan in front of his altar.

The Royal Interrogator by his altar.

The Torturer pokes Corvo with his hot poker.

The Royal Interrogator chases Corvo down the hallway.

An image of the Torturer, seen as the credits roll.

The Torturer in Back Alley Brawl.

Anton Sokolov's painting of the Torturer.

The Torturer's tarot card in the Special Edition Tarot Deck.
Add a photo to this gallery

Retrieved from "https://dishonored.fandom.com/wiki/Morris_Sullivan?oldid=168209"
Community content is available under CC-BY-SA unless otherwise noted.