Start a Wiki
watch 02:17
The Loop (Games)
Do you like this video?
The Millenary Canal is featured in The Brigmore Witches DLC. Located in Drapers Ward, it serves as the dividing line between the Hatters' and the Dead Eels' territories, and the majority of the conflicts between the two gangs, as they fight over the district, take place here.

Due to the water being rerouted by the Brigmore Witches, the canal is dried up, some of its bridges replaced with makeshift walkways after they collapsed into it. Oxrush Flowers can be spotted growing in the canal, and with some searching, a few valuables may be found as well.

Places of note near the canal include Jerome's Black Market Shop, the Dressmaker's apartment, a locked safe, and two Dead Eels posts, one at ground level and another on the roof of a nearby building.

View of the Millenary Canal from up high.

Oxrush growing in the Millenary Canal. 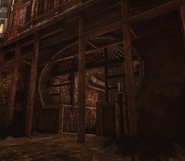 Sewer entrance in the Millenary Canal.

The Millenary Canal with water.

The canal.
Add a photo to this gallery

Retrieved from "https://dishonored.fandom.com/wiki/Millenary_Canal?oldid=128897"
Community content is available under CC-BY-SA unless otherwise noted.