Milky is a minor character and the titular albino wolfhound of the contract Burn the White Hound in Death of the Outsider.

Shortly before Death of the Outsider, a member of the Eyeless stole Milky to train him to fight at the Albarca Baths, not realizing that he was diseased. Rather than let him suffer at the hands of his opponent and his disease, Milky's owner put out a contract asking for him to be killed and his body to be burned, with a reward of 450 coins for doing so.

When Billie Lurk arrives at the Albarca Baths, Milky is in a cage with two other wolfhounds. Jeanette Lee is discussing their training with another Eyeless member there, who says that they are not yet ready for the ring, instead ripping apart anyone, friend or foe. Lee tells him that the more vicious they are the better.

Should Billie decide to complete the contract, Milky's body must be incinerated in the boiler at the far end of the storage room next to the cage room or by throwing flammable liquor at it. Doing so will grant the special action Burned Milky.

The cage where Milky is kept. 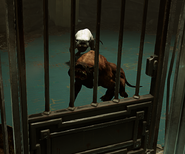 Milky in the cage with another wolfhound. 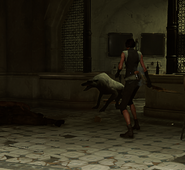 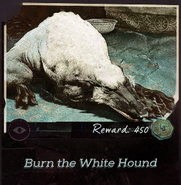 Milky on the image for the related contract.
Community content is available under CC-BY-SA unless otherwise noted.
Advertisement