Captain of the Dreadful Wale

"Killers in back alleys. Killers fighting over the thrones. What does it matter?"
—Meagan Foster

Meagan Foster is the one-armed captain of the Dreadful Wale and an ally to Corvo Attano and Emily Kaldwin during the events of Dishonored 2.

Meagan Foster is resentful and reserved about her past. In her own words, she was in a band of mercenaries during her youth. She knew Delilah Copperspoon and Breanna Ashworth, and briefly was a member of their coven of witches. She also claims to have had (but missed) the opportunity to kill the current Duke of Serkonos, Luca Abele, who had been involved in the death of her childhood friend.

She sailed to Serkonos to forget her past and started business in contraband with her ship, the Dreadful Wale. Here she got acquainted with the natural philosopher Anton Sokolov around 1847,[1] who had retired to the southernmost capital for his own grief. The two became close friends and she eventually invited him to live on her ship. While their relationship seems somewhat strained, Meagan cares a lot for the old man.

Meagan is also a close friend of the mine baron Aramis Stilton. She used to visit him, and Stilton appreciated these moments as a relief from the spiteful Karnacan elite. When he disappeared in 1849, Meagan rushed to investigate his manor, only to be pushed back by the Grand Guard. She was nearly killed in the fight and lost her right eye and arm. [2]

When the Crown Killer murders started in Karnaca in 1851, her friend Sokolov investigated them and concluded an involvement of Duke Abele. However, the old man was abducted by the Crown Killer from the Dreadful Wale in the early Month of Earth 1852. Meagan was able to follow them to the Addermire Institute but could not rescue him. She then decided to do what Sokolov had intended to do: to sail to Dunwall and warn Empress Emily Kaldwin and her Royal Protector and Spymaster Corvo Attano of an attempt at the throne of the Empire. She arrived on the day of the Coup, too late to prevent it.

Meagan Foster anchored the Dreadful Wale by the docks in the Tower District and passed a message along to Captain Mayhew to contact Corvo Attano. Either Corvo or Emily recovers the message from the dying captain during their escape from Dunwall Tower and embark on her ship to flee from the Imperial capital and their seemingly immortal enemy. Meagan greets the protagonist and informs them of Sokolov's disappearance. She then agrees to set sails to Karnaca to find a way to defeat Delilah in exchange for rescuing the old scientist.

During their stay in Karnaca, Meagan Foster provides the protagonist a base of operation aboard the Dreadful Wale. She sails them across the city's canals on her skiff and brings them back once they have accomplished their objectives. They eventually achieve to rescue Sokolov from his rival and disciple Kirin Jindosh, and to defeat the Duke and his inner circle. Should the course of history be changed by preventing Stilton from going mad and disappearing from public, Meagan will have regained her arm and eye since the fight at his manor would have never occurred. She brings the protagonist back to Dunwall after the Duke's elimination and recovery of Delilah's soul to reclaim the throne and to end Delilah's reign of terror.

Once back in Dunwall and if the protagonist kept the situation to low chaos, Meagan will open up to them on her past. She reveals her true name, Billie Lurk, her life among the Whalers and her participation in the assassination of Emily's mother and Corvo's lover, Jessamine Kaldwin. She will either take their spite without speaking back or be surprised by their forgiveness. If left alive, she will fall back to her old life and sets out to find 'the closest thing she'd ever known to family', the Whalers' leader Daud.

"As Meagan Foster faded from the world, Billie Lurk stepped from her shadow, setting out to discover her truest self, and seeking the closest thing she'd ever known to family..."
—The Outsider comments on Meagan's fate

Foster is secretive and businesslike. She expresses a great deal of regret for mistakes she made in her past. Her softer side is shown in her devotion to Sokolov, her friend and father figure. It also seems that she was never really able to leave her past and identity as Billie Lurk behind, which is further evidenced when she returns to her former life after the Coup is ended, given that the protagonist did not kill her.

The Heart describes her as being very angry, and that her rage hides things.[3] 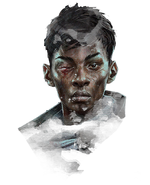 Foster ferrying Emily to her destination.

Meagan Foster on the deck of the Dreadful Wale.