Maggot Montaine is a minor character in The Brigmore Witches DLC for Dishonored. He is found in an alley connecting the Riverfront with Drapers Ward proper during the mission The Dead Eels.

Maggot Montaine is a member of the Dead Eels gang and is stationed as a guard near the Riverfront. He is originally from Karnaca, but has taken to the life of being a Dead Eel.

He initially went along with Edgar Wakefield's usurpation of the gang and the Undine from Lizzy Stride. However, Montaine soon regrets the decision and can be heard lamenting Lizzy's absence. He particularly misses how much Lizzy enjoyed pirating along the river.

Once Lizzy is restored as leader of the Dead Eels, he is in a much better mood, even reminiscing about sailing around Dunwall. 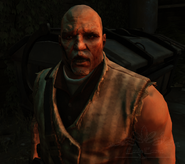 Montaine reminiscing about the old days.

Montaine patrolling the alley by the Riverfront.

Montaine searching with a fellow Dead Eel as Naria of the Brigmore Witches spies on them.

Montaine and his fellow Eel having a chat.