"The Golden Cat was here long before she came to run it. But the curtains were her idea."
—The Heart[1]

Madame Prudence is the proprietor of the Golden Cat brothel and bathhouse.

Before she became a madame, Prudence was a streetwalker and "wore naught but filth."[2]

At some point during her older years, she ascended to the position of madame at the Golden Cat. She is not very kind, with the courtesans preferring the previous madame,[3] though this in part is because she makes sure not to grow fond of any of them.[4] She runs a tight ship, ensuring the satisfaction of her guests during their visits to the Golden Cat, with pleasing important clients being one of her key interests. Business has slowed as the plague ravishes Dunwall,[5] though she has more important things to worry about.[6]

At some point, she had a daughter. By 1851, this daughter, Madame Steele, runs the Golden Cat.[7]

Corvo Attano encounters her during the mission House of Pleasure. She carries the Master Key to the Golden Cat, which allows entry through many doors throughout the building. When Corvo arrives, she is talking to a City Watch Guard about where Lords Custis and Morgan Pendleton are currently situated. After that conversation, the guard goes about his patrol while Prudence goes to her office, where she remains for the rest of the mission unless disturbed.

Later that night, she is expecting more important guests, which worries her considerably.[8]

Madame Prudence begs Corvo not to hurt her. 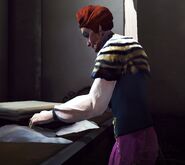 Madame Prudence in her office.

An image of Madame Prudence.

Madame Prudence and her employees.