Mace Brimsley is a male aristocrat encountered alongside his wife in the Flooded District.

Brimsley and his family live in a posh house, hosting a number of parties, and have sufficient money to attract the attention of the Bottle Street Gang, one of whom hid in their dumbwaiter all night to avoid detection.

Among the aristocracy, it is rumored that they worship the Outsider, through methods such as Mrs. Brimsley bathing in her nephew's blood. It is to these unconfirmed actions that their financial success is attributed. During the mission House of Pleasure, Bunting confesses to worshipping the Outsider with them. Lydia Brooklaine once secretly observed a party at the Brimsley household, and described the experience as "very strange".

Brimsley and his wife ended up in the Flooded District after Mrs. Brimsley caught the plague, and he feigned death along with her to be transported to the district. As the Dead Counter seemed more concerned with the value of his estate, Brimsley easily managed this. He slowly began to regret surviving the drop from the plague wagon as he still found his wife's nagging annoying.[1]

In low chaos Brimsley can be found as part of the Creating a Safe Haven side objective, wherein Corvo can help a group of plague survivors escape death at the hands of the City Watch.

In high chaos he is found as a weeper, like all the other members of Blake's group.

Render of the generic aristocrat model used for Mace Brimsley.

Mace Brimsley and his wife. 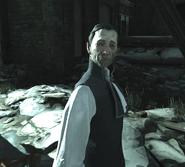 Mace Brimsley in the Flooded District. 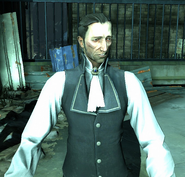 Mace Brimsley outside the tenement building. 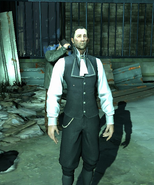 Mace Brimsley in the Flooded District near the Rudshore Gate.

Mace Brimsley as a weeper.
Add a photo to this gallery

Retrieved from "https://dishonored.fandom.com/wiki/Mace_Brimsley?oldid=168215"
Community content is available under CC-BY-SA unless otherwise noted.