"I have no time for fools. I will be solving the riddle of this plague."
—Luigi Galvani[1]

Doctor Luigi Galvani is an unseen character mentioned in Dishonored, Dishonored 2 and Death of the Outsider. A supporter of Empress Emily Kaldwin since her mother's time,[2] Galvani is a natural philosopher interested in animal biology and studying the rat plague.

Galvani was born in Serkonos.[citation needed] By 1815, he had moved to Dunwall and was a student at the Academy of Natural Philosophy. Later on, he returned to the Academy as a lecturer, generally talking about blood-borne diseases transmitted by Serkonan fauna. After a dinner on the 28th Day of the Month of High Cold, the professors retired to the common room. Later in the evening, Anton Sokolov arrived, recognised Galvani, and called him over for a drink and had a conversation that Galvani regards as "undoubtedly the most stimulating [...] of [his] life."[3] This day went on to become the most important of his life.[1] Galvani remained in contact with his friend Artemis Moore, the Academy's Procurement Clerk and Provisioner, until at least 1837. Due to his position, Moore could occasionally send Galvani various pieces of equipment that he needed to continue his studies.[4]

By 1837, Galvani resided in a posh house on John Clavering Boulevard. He maintains a functional laboratory containing experimental subjects and materials and has garnered a good reputation among his servants.[5]

At some point, Galvani ventured to Pandyssia, following Sokolov's traces. While there, one of the sailors caught an exotic bird that had flown too close to the ship. It was caged, and Galvani took him back to Gristol, the first of his species to reach there. Named Bertie, the bird become rather famous with the public, featuring in illustrated children's books and packing theaters in which Galvani lectured on Pandyssian fauna. Over time, Bertie became rather tame, accepting grapes from Galvani's hand. After a few years, Bertie died, and Galvani had him stuffed and occasionally put on show.[6]

Before Vera Moray's descent into madness in 1815,[7] Galvani was her doctor. When the rat plague hit Dunwall, he put all his focus on that, trying to find a cure for the plague. He has worked out that the rats arrived no earlier than 1830, and has speculated that they were intentionally introduced by a foreign power. He is also performing experiments to ascertain whether they are smarter than ordinary rats,[8] as well as studying their feeding habits.[9] Galvani continued to put his knowledge of human anatomy to good use when performing research on "weepers", individuals infected with the plague. Copies of his notes on the proper handling of plague victims were distributed around the city to help stem the spread of plague. His importance led to the City Watch placing a guard upon his house.

As part of his research, Galvani is a vivisectionist, cutting up rats to help find a cure to the plague. He is aware such behavior is illegal, and so performs these operations in a secret room behind his bookshelf.[4] It is for this reason that Granny Rags directs Corvo Attano to the Galvani Residence in search of a plague rat viscera to contaminate the Bottle Street Gang's elixir still.

During the missions High Overseer Campbell and House of Pleasure, Galvani is out of Dunwall[5] and so never encounters Corvo, who enters his house on two occasions. The first time is for Granny Rags, while the second is to find Crowley, Slackjaw's right-hand man. Galvani has returned by the last day of the Month of High Cold,[1] finding that his home had been robbed.[10] He had been invited to a party by Lady Boyle, but declined, not wishing to spend his time with "fools", preferring instead to keep studying the plague.[1]

By 1852, Galvani, annoyed with the multiple robberies he had been subjected to at his old house, has moved to Kaldwin Boulevard in the Tower District, very close to Dunwall Tower itself. While there, he has seen the Empress pass by in a coach, as well as the Royal Protector observing events from the rooftops. It is because of this that he views himself as safe from further break-ins, though is irritated by the smaller apartment. Despite this, he continues his work, but both the nature of current research and the source of his funding is unknown.[10]

Corvo or Emily can enter his new apartment during the mission A Long Day in Dunwall and rob him yet again. As a result of this, by the Month of Harvest[11] Galvani will declare that Dunwall is cursed and permanently move to Tyvia. He will leave his journal behind, sarcastically inviting the protagonist to "roll [...] up in my carpets and lick the dust from the furniture".[2] If the protagonist chooses not to rob Galvani, he will still have moved to Tyvia by the time they return, as he does not approve of the changes in Dunwall under the new Empress.[12]

Even living in Tyvia, Galvani is still concerned about his property, and so promptly hires a lockbox at the Dolores Michaels Deposit & Loan Bank. Despite reassurances that his lockbox is completely safe, Galvani was unable to stand the thought of being robbed yet again and so sent a great many letters to the bank. However, he refused to change the code to his lockbox from the most important day of his life.[11] During the mission The Bank Job, it is possible for Billie Lurk to break into Galvani's safe, robbing him yet again.

The plaque outside Doctor Galvani's manor.

The empty desk of Doctor Galvani. 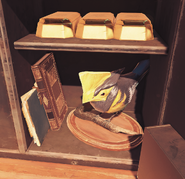 Galvani's safe in Dolores Michaels Deposit & Loan Bank, with the stuffed Bertie inside.