"You squeeze out every drop of wine you can, then you pass into nothing. You can put that on my tombstone."
—Duke Luca Abele

Luca Abele is the acting Duke of Serkonos during the events of Dishonored 2 and the son of the previous Duke, Theodanis. In contrast to his benevolent father, he oppresses the people of Serkonos, provoking acts of rebellion against his authority. He is also openly disdainful for the Abbey of the Everyman.[1]

Luca is the eldest son of Duke Theodanis and Duchess Callas Abele. During his youth, Luca met Delilah Copperspoon in Dunwall.

During his time at school, there were numerous incidents in which Luca hurt other students. Letters were sent to his father, who was worried, realizing that his son's behaviour could not be ignored as a schoolboy prank, as Luca was not a boy anymore.[2]

During a visit to Dunwall in 1828, Luca goaded his younger brother, Radanis, into attacking two street girls. Radanis attacked and killed one of them, causing the other to retaliate by breaking off a wooden gazelle from Luca's rail coach and driving it into Radanis' eye, killing him.

After the death of his father in 1847, Luca became the new Duke of Serkonos. He had the old palace razed to build a new, more ornate one on the same position at Point Abele. Luca also started to gradually undo all his father had done for Karnaca, preferring his own comfort and well-being to the lives of his people.

Two years later, twelve years after her disappearance, Delilah contacted Luca from the Void. To free her from there, Luca convinced Aramis Stilton to allow Luca and others to host a séance at Stilton Manor. The séance was successful and Luca, Breanna Ashworth, Kirin Jindosh, Grim Alex and Stilton managed to return Delilah from the Void. The experience proved to be too much for Stilton, however, who went insane from what he saw. As Stilton was a loyal friend to his father, Luca ordered him imprisoned in his own mansion and employed the Howlers to provide Stilton with food. After Delilah had returned, she cast part of her soul into an effigy to become immortal. She entrusted the effigy to Luca, who stored it at his vault at the Grand Palace.

As preparation for Delilah's coup, Luca sent Grim Alex to Dunwall to eliminate political enemies of Empress Emily Kaldwin. He also closed off Addermire Institute to hide the fact that Alexandria Hypatia, the true identity of Grim Alex, was gone from time to time. Sometime before she left for Dunwall to kill Ichabod Boyle, she kidnapped Anton Sokolov from the Dreadful Wale and brought him to the Addermire Institute, from where he was then sent to the Clockwork Mansion.

At the beginning of Dishonored 2, Luca Abele arrives at Dunwall Tower during the anniversary of Empress Jessamine Kaldwin's death. He presents Delilah Copperspoon before the royal court as the lost heir to the throne and, blaming Emily and her father Corvo Attano for the murders of the Crown Killer, helps her stage the coup to usurp the throne.

Luca Abele is nothing like his father who was known as a good man. He abused his power in Serkonos for his own comfort while leaving his subjects to suffer. When evidence that part of his empire was decaying do his poor leadership he denied it and still arrogantly believing that Serkonos was still thriving under his leadership. He did have some respect for his father though as he agreed to take care of Aramis Stilton after he went insane do to loyalty to his father. He also had an obsessive love for Delilah even though she clearly did not have the same feelings and she only thought of him as an ally and a good friend. 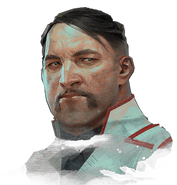 Luca, His Eyes On Me

A silvergraph photo of Luca Abele.

A silvergraph of the conspirators.

Luca's unnamed painting of a wolfhound.

Luca Abele, with a clockwork soldier by his side in Dunwall Tower.

Luca in the office above his bedroom.

Luca in the office above his bedroom.

Luca, moments before his death through Emily.

Using Possession on the unconscious Duke after he is arrested.