Overseer Headquarter in the Dust District

"I won't rest until all the people of the Empire are safeguarded, counselled toward better lives. Whatever that requires of me."
—Vice Overseer Liam Byrne[2]

Liam Byrne is a member of the Abbey of the Everyman and Vice Overseer of Karnaca in the year 1852. Corvo Attano or Emily Kaldwin can encounter him at the Dust District, where he has spent several years locked in a struggle for the district with Paolo, leader of the Howlers.[3]

Byrne was born in Fraeport to a lowly family.[1] He was taught to read by his father, who carved letters into hand-made wooden blocks,[4] while his mother encouraged his musical skill.[5] One day, he encountered an Overseer with a wolfhound, and was transfixed by the strictures the Overseer was reciting.[6] The Overseers kept an eye on him for months before taking him away for the Trials of Aptitude.[7]

By 1852, Byrne reached the position of Vice Overseer of Karnaca, the youngest person to hold that title in decades.[8] Responsible for the spiritual wellbeing of all Karnacans, his main concern is the criminal organization known as the Howlers, as their leader, Paolo, is rumored to own a black-magic artifact, considered heresy by the Abbey.[9] While Byrne considers this conflict to be his most important calling at the time,[10] the views among the public on this topic are varied.[11][12]

Byrne is also rather concerned about the Oracular Order, believing that their prophecies are somehow being influenced and taken down a dangerous path. He believes that the curator of the Royal Conservatory, Breanna Ashworth, is responsible for this, but he cannot express this aloud as his rivals in the Abbey would accuse him of heresy.[13] To confirm his suspicions, shortly before the mission The Royal Conservatory he and Overseer Ogburn set up a surveillance post overlooking the Royal Conservatory. While he had to depart a few days before Corvo or Emily arrive there, citing his fight with the Howlers, he trusts Ogburn to keep an eye on things.[14]

Byrne also has issues with Duke Luca Abele and dislikes the occasions were they are forced to interact.[15] Abele is openly disdainful for the Abbey, disliking how they tell him to stop drinking and finding their lectures on rat flesh unappetising.[16] As such, Abele is attempting to remove the Abbey from Serkonos, and to that end he has banned Byrne from the Grand Palace. Byrne has written a number of letters to High Overseer Yul Khulan asking for guidance.[17]

During the mission Dust District, Byrne is a potential ally and can help either Corvo or Emily to solve the Jindosh Riddle in order to enter Aramis Stilton's mansion. However, the body of Byrne's archenemy, Paolo, must be delivered to him first. Alternatively, Byrne can be delivered to Paolo or both men can be ignored completely. If both are knocked out, they can be shut in crates and be exchanged for two prisoners, forcing them to work in the mines for five years; in this outcome, both the Abbey and the Howlers lose influence in Karnaca, and the Grand Guard peacefully reasserts its authority in the Dust District.

If Byrne is killed or goes missing while Paolo survives, the Abbey outpost in the Dust District is abandoned and the Howlers begin to exert control over Karnaca.[18][19] If Byrne survives, he can become a member of the new Duke's grand council. If Paolo is captured or killed, Byrne swiftly begins to build a new chapel and increase the number of Overseers in the district. He also warns all citizens to attend services or be punished.[20][21] If Paolo survives, in the low chaos ending they can be seen working together on the council. Byrne's plan is for Karnaca, and eventually the entire Empire of the Isles, to return to following the Seven Strictures.[2] 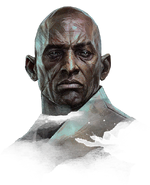 Overseer Byrne with a wanted poster for Paolo.

The triumphant Byrne in the final sequence (the Duke is dead, Paolo is defeated).