Oracular Sister
Lena Rosewyn is a high-ranking Sister of the Oracular Order. She is encountered in Death of the Outsider during the mission The Stolen Archive.

When the Abbey of the Everyman sent the Dunwall Overseers to Dunwall Tower to remove Delilah Copperspoon from power, Rosewyn tasked one of the Overseers, Overseer Fitz, with a special order. Having heard rumors about the heretical powers of Royal Protector Corvo Attano, Rosewyn sent Fitz to search for evidence of Corvo's association with the Outsider inside the Tower. Fitz was to report back to Rosewyn only but during the assault, the Overseer's were slain before even reaching the Tower's entrance. Fitz, although wounded, was the only survivor.

After the defeat of Breanna Ashworth and her witch coven, their headquarters - the Royal Conservatory - is taken over by the Abbey. In order to purge the place from heresy, a huge part of Cyria Gardens is quarantined. The Overseers, who are led by Roving Vice Overseer Cardoza, are supported by Oracular Sisters led by Rosewyn. This has sparked some controversy and surprise in Karnaca, as the Oracular Sisters rarely leave their chapels.

During their work, Rosewyn finds a silvergraph which was sent to Breanna by one of the Eyeless. After investigating it, Rosewyn realizes that the silvergraph depicts a location where it is possible to enter the Void. Realizing the danger this could pose to the order, Rosewyn plans to have the silvergraph sent to the Order immediately. 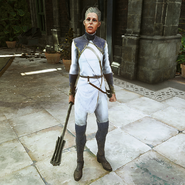 Sister Rosewyn in her trance.
Add a photo to this gallery
Retrieved from "https://dishonored.fandom.com/wiki/Lena_Rosewyn?oldid=159962"
Community content is available under CC-BY-SA unless otherwise noted.