"The Duke’s circle is full of clever bastards, but no one is like Jindosh. His home is supposed to be full of marvels, and there’s a reason people are afraid of his mansion. Jindosh won’t care who you are or what you want. He looks at you like you’re a puzzle, to be taken apart."
—Meagan Foster about Jindosh[1]

Kirin Jindosh is the Grand Inventor to the Duke of Serkonos and founder of Jindosh Technologies.[2] He is responsible for the creation of the Clockwork Soldiers and the construction of the Clockwork Mansion, in which he also resides.[3] Jindosh is a former student of the natural philosopher Anton Sokolov[4] and is featured in the E3 2015 Announcement Trailer for Dishonored 2.[5]

During the trailer, he was expecting Emily Kaldwin's attempt on his life and was calm and prepared for it. He lost composure when he realized his mechanical soldiers and traps were not enough to stop her.

During the events of Dishonored 2, Jindosh holds Anton Sokolov captive in his Clockwork Mansion. Either Corvo Attano or Emily Kaldwin arrive at the mansion to free Sokolov and to eliminate Jindosh before he can create an army of Clockwork Soldiers [6].

Kirin Jindosh in his home. 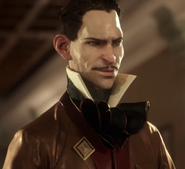 Kirin patrols the halls of his Clockwork Mansion.

Kirin and his ceramic thumb. 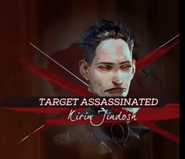 Kirin's death animation (GIF).
Add a photo to this gallery

Retrieved from "https://dishonored.fandom.com/wiki/Kirin_Jindosh?oldid=127452"
Community content is available under CC-BY-SA unless otherwise noted.