Kingsparrow Island is the location of the final mission of Dishonored, The Light at the End. A barren island off the coast of Dunwall, it was fortified and militarized in the aftermath of the Morley Insurrection. The island is divided between a fortress and a lighthouse.

In low chaos, the sky over the island will be clear, and enemies will not be aware of Corvo Attano's presence. In high chaos, the sky is dark and enemies are on the lookout for Corvo and will attack him on sight. In addition, the fort is filled with rats.

Kingsparrow Fort is the primary structure within the walls that surround the lighthouse. Its exterior is dominated by the island's rocky terrain, where numerous small docks for barges have been installed. The exterior of the fort is heavily guarded, incorporating arc pylons and a watchtower.

Entrances to the fort are guarded by walls of light located near the harbor and the beach. In the lower level courtyard is a large staging area heavily patrolled by officers, guards and Overseers. Within the lower level walls are a lifeboat dock and a stairwell that connects to the battlements. Also on the lower level is a control room for the walls of light, where whale oil tanks are hidden, with the power modules and wiring boards for their systems. It is separated from the rest of the fort by locked automatic doors but is connected to the sewers.

On the battlements are several covered areas as well as chimneys. A stairwell from the courtyard connects to the lighthouse's cable bridge, which is defended by an arc pylon. The elevator that leads up to the lighthouse is locked, and can only be accessed with a key found on guards or in a cabin.

The Lighthouse, officially known as Burrows Lighthouse, was one of the last great projects of the late Lord Regent's reign. Incorporating many Sokolov technologies and made entirely out of metal, it dominates the island. At the top level is a large, glass penthouse that serves as the headquarters of the fort. The penthouse contains a large atrium with a spiral staircase centered on a statue of the Lord Regent.

On the second floor of the penthouse is a planning table with a map of Dunwall, several rooms, and a broadcasting center. Above is a small balcony, and on the topmost level is an engineering room which controls the elevator. The lighthouse is connected by cables to one of the battlement shelters, which in turn is connected to several rocky islands, serving as a stability measure due to the height of the lighthouse.

The entirety of Kingsparrow Island

Kingsparrow Fort and the Burrows Lighthouse.

The lighthouse and fortress from afar.

The lighthouse at night in high chaos.

View of the fort from the water.

Steps leading up to the fortress.

View of the lighthouse from the fort.

Back view of the lighthouse

A wall of light.

Control room for a wall of light.

Control room for the gatehouse wall of light.

Lifeboat instructions on a wall, found in the Kingsparrow Fortress.

Bridge walkway leading to the lighthouse. 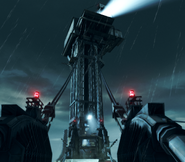 The rock upon which the lighthouse is built.

View of the fortress from atop the lighthouse.

A sign atop the lighthouse, warning against danger of falling.

The ledge on the lighthouse.

A statue of Hiram Burrows in the atrium. 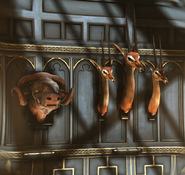 Entryway into the planning room.

View of Kingsparrow Island in Dishonored 2
Add a photo to this gallery
Retrieved from "https://dishonored.fandom.com/wiki/Kingsparrow_Island?oldid=159468"
Community content is available under CC-BY-SA unless otherwise noted.