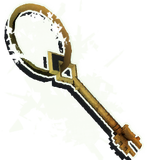 Keys are important items that can be found throughout the games of the Dishonored franchise and their respective DLCs used to open certain safes, chests, gates, doors, and other miscellaneous items that are locked.

In Dishonored and its DLC, once a key is collected by either Corvo Attano or Daud, it will be added to their respective key ring. Sometimes, a key may be intended for use in a mission other than the one in which it was found.

Starting with Dishonored 2, the keys which the protagonist can collect count as mission items and disappear after returning to the Dreadful Wale.

Keys in The Knife of Dunwall

Keys in The Brigmore Witches

Keys in Death of the Outsider 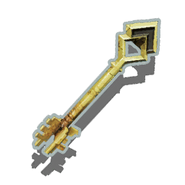 Key icon in Dishonored 2 and Death of the Outsider. 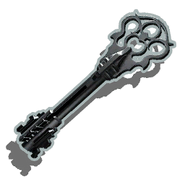 A vault key in Dolores Michaels Deposit & Loan Bank.
Add a photo to this gallery
Retrieved from "https://dishonored.fandom.com/wiki/Keys?oldid=166107"
Community content is available under CC-BY-SA unless otherwise noted.