Keyholes are located on most doors encountered in the games of Dishonored franchise and can be utilized by the protagonists to scan a room before entering, as well as eavesdropping on any conversations going on inside. This allows a tactical advantage over enemies, as their positions will be known prior to engaging or avoiding them.

This technique is made almost obsolete by Dark Vision, Void Gaze at Tier II and Foresight, as those supernatural abilities allow all enemies to be seen and (with the former two abilities at Tier II) objects within a certain radius, nullifying the advantage gained from peering through keyholes. In Dishonored and its DLCs, keyholes must still be used to eavesdrop on conversations even with Dark Vision or Tier II Void Gaze, while in Dishonored 2 and Death of the Outsider, they can be heard through walls and doors.

Keyholes are most useful when attempting to unlock Mostly Flesh and Steel in Dishonored, and no-power playthrough in Dishonored 2.

The Voyeur bonecharm in the Shadow Rat Pack DLC allows for magnification of sight when peeping through keyholes.

Daud spies on Timsh and Melissa through a keyhole. 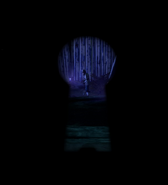 A guard peeping through a keyhole at the Golden Cat. 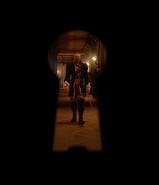 A patrolling City Watch Officer seen through a keyhole.

Corvo uses a keyhole to spy on a courtesan. 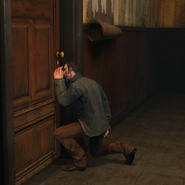 Piero using a keyhole to spy on Callista.

A City Watch guard seen through a keyhole while carrying a whale oil tank.

Corvo looking through a keyhole.

Corvo looking through a keyhole in the Debut Trailer (GIF).
Add a photo to this gallery
Retrieved from "https://dishonored.fandom.com/wiki/Keyholes?oldid=164732"
Community content is available under CC-BY-SA unless otherwise noted.