Karnaca, also known as "The Jewel of the South at the Edge of the World",[1] is the capital city of Serkonos, located in the eastern portion of the nation and at the southernmost tip of the Empire. It serves as the main setting of Dishonored 2.

Billed as a major metropolis where cultures and customs from all over the Empire are integrated into daily life,[1] Karnaca is heavily favored as a tourist destination for the elite and upper classes.[2] Karnaca maintains its own notable police force, the Grand Serkonan Guard, which serves as both the military and urban protection.[3][4]

According to a popular legend in Karnaca, owls carried the first settlers to the city from the Isles to the North. Neighboring areas' legends suggest that they were brought on the backs of whales from the sea. In truth, nomads from the North settled around what would become Karnaca alongside other settlers, who resided in what is now known as Clemente Landing. The two groups lived in relative peace, intermarrying amongst one another, although their various traditions persisted.

With time, Karnaca opened its port, as a peaceful and profiteering solution to the ever-present threat of piracy in Serkonos. At this point in time, Karnaca offered little other than as a place where ships could restock and refuel on wine, weapons, and food, far away from more lucrative trades between Serkonos and Gristol.

This all changed by the 12th Century, when miners in what would become the Batista Mining District, in an effort to uncover more iron, discovered rich veins of silver instead. Thus began the prosperous First Silver Age of Karnaca, where miners built wooden homes around the mountains or in tunnels, all while elevating arts and music that were once the purvey of pirates into a higher form of art enjoyed by the upper class.

The First Silver Age came to an abrupt end by the 1300s, due to two separate, but equally disastrous causes. The veins of silver that had once provided so much for the miners had gone dry, while another threat came from across the sea: a disease known as The Peste. At first, the color of the miners's skin coupled with incessant coughing suggested that this was a mere irritation brought about from constant work deep down in the silver mines. Eventually, those afflicted with The Peste became more unstable, attacking others in their violent insanity. The disease would spread across the entire city, forcing the military to burn much of it down to the ground.

The city would soon recover from the Peste, and new settlers lured in by the area's beautiful surroundings and a morbid curiosity as to how it survived such dark times breathed new life onto Karnaca. But it was during the 1600s that a lucrative opportunity presented itself to Karnaca. As the War of Four Crowns raged in Gristol, Mila and Matias, nobles of the Duchy of Aventa, led a cabal of merchants and nobles to make their move. Bribing and inspiring the Grand Guard to work on their side, they ousted the King of Serkonos by mobilizing the entire island against him and his family. The Dukes and Duchesses of Aventa have represented the empty throne of Serkonos within the Empire since then.[5]

The city grew with each wave of settlers from all over the Isles. The first were settlers from Morley, struck by the 1803 Morley Famine,[6] who started building a village on the other side of the city. Later, wealthy trade companies from Dunwall restructured the city proper, building boulevards and even the Grand Serkonan Canal which splits the island in two.[7][1] The locals are known as hardworking people.

The city is located in a bay surrounded by high cliffs and lush forests, and contains a large and developed port. It also boasts a large silver mine, the Wind Corridor built in 1810, and the Royal Conservatory of Serkonos inaugurated in 1819.[8] The city is partially powered by wind turbines, taking advantage of high winds in the area, as well as imported whale oil from Gristol.[9][10] Power lines can be spotted near the coast and going up the mountain.

Like Dunwall, society in Karnaca is heavily stratified. Aristocrats form one of the highest strata of society; however, in the wake of the Bloodfly Concern, many of these nobles have taken to the streets, with some even peddling contraband wares. Laborers and immigrants, such as those from Morley, are subject to suspicion by the Grand Guard. The oppressive nature of the Duke's reign over the city has led to increased scrutiny on these laborers, with announcements by the Guard dictating that "all new workers and foreigners" on the streets of Karnaca are subject to searches and questioning. In the wake of the Bloodfly Concern, as well as the unrest in Dunwall, many businesses and establishments in the city have been shuttered.

The Abbey of the Everyman is also prevalent as a major social force within the city. Their presence, in the form of Overseers, can be seen in and around the city, with a central headquarters in the former Bayles Trading Company Building in the Dust District, as well as outposts in the Campo Seta Dockyards and the Cyria Gardens. Citizens, particularly those in the Dust District, are encouraged to make donations to the Abbey.

Karnaca is governed by a myriad of administrative institutions such as the Mines Department, the Water and Sewerage Department, the Division of Bridges, Roads, and Cemeteries, the Office of Architectural Planning, and the Grand Chamber of Commerce.

Karnaca's main law enforcement agency is known as the Grand Serkonan Guard. Comprised of regular guardsmen and enlisted veteran officers, the Grand Guard serves both in civilian and military capacities on the streets of Karnaca. Aiding the Grand Guard are the Overseers of the Abbey under Vice Overseer Liam Byrne, as well as various security mechanisms, such as watchtowers, walls of light, arc pylons, and mechanized automatons known as Clockwork Soldiers.

While the Grand Guard has been given further authority in the time of the Bloodfly Concern, the decline of Karnaca, as well as the coup in Dunwall, has led to further unrest and oppression. While announcements have been posted imploring citizens to "complain" about Grand Guard abuse to their nearest Guardsman, this has led to on-the-spot executions of innocent civilians and victims of the Duke's regime.

As a response to these developments, the Howlers – a criminal gang based out of the Dust District – have been fighting against the reign of the Duke as well as the abuses of the Grand Guard. Known for their unique weaponry, the Howlers have taken to using violence and intimidation in order to retake Karnaca from the Duke and his allies. This has led to them becoming a target of the Abbey of the Everyman, as Liam Byrne, the head of the Overseers in Karnaca, suspects the Howlers' leader, Paolo, of possessing a black magic artifact. The abuses of both the Howlers and the Abbey have resulted in increasing violence and civil unrest in the Dust District, which has forced the Guard to erect walls of light to contain the violence to the district.

Karnaca, as capital of Serkonos, has in recent years adapted and developed as a result of the increasing industrial and technological development across the Empire. In stark contrast to the heavy industry of Dunwall, much of Karnaca's power is derived from the winds that blow across the city. In particular, the Wind Corridor – a vast structure that channels wind currents from Shindaerey Peak – has proven pivotal to maintaining the infrastructure and industry of the city. Another noticeable variation is the use of wooden barriers and windbreakers across the city, created in an effort to barricade streets as well as to protect the city's various buildings against the strong winds.

During the reign of Duke Luca Abele, Karnaca also saw a shift into using security devices unseen since the rat plague in Dunwall. Watchtowers, walls of light, and arc pylons have been adapted to and installed within the city. In some cases, these security technologies are powered by windmills built on the sides of streets and on top of buildings, and as a result, allow for a more steady flow of power than the whale oil tanks that were an ubiquitous feature of the Sokolov security devices used in Dunwall.

Like Dunwall, rail transport for goods and passengers is common in Karnaca, whether it be on elevated tracks, street rails, or on the sides of mountains. Boats and whaling trawlers are also common, with some utilizing the Grand Canal to enter and exit Karnaca.

Concept art of a park in Karnaca.

Concept art of an old district on the edge of the mountain.

Concept art of an enclosed courtyard in Karnaca.

Corvo battles enemies near the windmills.

Emily fights the Clockwork Soldiers on the streets of Karnaca.

Members of the Grand Serkonan Guard in the streets of Karnaca.

The city lies below in the distance.

Gazing over the city of Karnaca.

Karnaca, as seen in Dishonored 2.

Emily mesmerizes members of the Grand Serkonan Guard on the streets of Karnaca.

Members of the Howlers Gang dance in a saloon within the city of Karnaca.

Karnaca is visible in the background as Meagan is ferrying Emily to her destination.

The entrance to the Royal Conservatory. 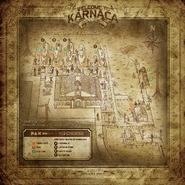 Simulation of the Dust District at the Pax West event.

The Addermire Institute, located on an island in the bay of Karnaca.

The Campo Seta dockyards in Karnaca.

A view of the Grand Palace.

A Carriage in Karnaca, with the Grand Palace in the background. 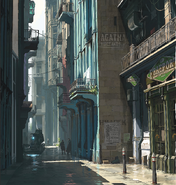 Karnaca in The Art of Dishonored 2.

"This drawing shows the edge of Karnaca, which raises the question: Which is more organic, the forest or the city?"

"Giant pipes direct the wind to the wind turbines."

The silver mines in activity at night.