"More likely we get stung to death and end up hatching more bloodflies for the next group of idiots who try to get inside!"
—Karl’s stance on going through a bloodfly-infested apartment

Karl is a minor character in Dishonored 2. He and a group of friends can be encountered at the Campo Seta Dockyards, where they are planning to rob a bloodfly-infested building.

Shortly before Dishonored 2, a house near the Dockyards was overcome by bloodflies. Karl’s two friends are in favour of their plan to sneak into the house, avoid the bloodfly nests and take whatever coin they can find. Karl is opposed to the plan, pointing out that they don’t even know if the people inside the house had anything worth stealing. One of his companions reminds him of their ultimate goal, to bypass the wall of light and escape Karnaca, and that they do know the apartment does that. Karl still refuses, and eventually his group relents, preferring unity over leaving Karl behind. They walk to a nearby outdoor kitchen, planning an alternative way to make money and bypass the wall of light, while Karl leaves them to smoke a cigarette. 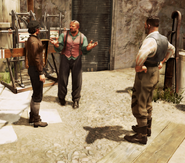 Karl explaning his position to his friends.
Add a photo to this gallery

Retrieved from "https://dishonored.fandom.com/wiki/Karl?oldid=149289"
Community content is available under CC-BY-SA unless otherwise noted.