Dishonored Wiki
Register
Don't have an account?
Sign In
Advertisement
in: Spoilers, Dishonored Characters, The Knife of Dunwall Characters,
and 4 more
English

Empress of the Empire of the Isles

"Corvo, if only there was someone else I trusted to send so that you could remain near. When you are near my heart is at peace... Hurry home, and bring good news."
—Jessamine to Corvo

Jessamine Kaldwin I is the Empress of the Empire of the Isles, who is killed by the assassin Daud on the orders of the Royal Spymaster Hiram Burrows. Before her death, Jessamine watches helplessly as her daughter, Emily Kaldwin, is kidnapped by Daud's assassins.

As she passes, she charges Corvo Attano with the safe return and protection of her beloved daughter. Her body and circumstance are later used to charge Corvo with treason, abduction, and regicide.

Born to Euhorn and Beatrix Kaldwin on the 3rd day of the Month of Earth, 1805,[2] Jessamine is the second ruler in the Kaldwin line, which rose to power after Empress Larisa Olaskir was assassinated and left the former ruling dynasty with no heir.[2][3] After naming Corvo Attano her Royal Protector at age 12,[4][5] she was crowned soon after her father's death in 1825.[6][2] While her father presided over a period of relative peace and prosperity, Jessamine's time as ruler saw "political intrigue and minor conflicts [that] created cracks in the Empire, undermining unity across the Isles".[3] The exact nature of these conflicts is unknown.

Jessamine committed herself to a just and compassionate rule, doing whatever it took to alleviate the suffering of her people. For instance, she rejects Hiram Burrows' proposal to establish quarantines and a deportation program as a response to the rat plague, believing they should value the lives of all of Dunwall's citizens. She is also a very trusting person, which strained her relationship with the paranoid Royal Spymaster,[7] and likewise blinded her to his scheming.

Though they are not seen together during Dishonored, Jessamine is said to have been familiar with Anton Sokolov.[8] Sokolov also mentions personal knowledge he has of Jessamine, telling Corvo she was "a strange one. Stranger, I think, than you know".

Jessamine maintained a close relationship with Corvo Attano, and the two became lovers on the 2nd day of the Month of Rain, 1823.[2] While the relationship is kept secret, rumors about it are prevalent throughout Dunwall. This gossip, along with the fact that Jessamine never married,[6] have resulted in speculation that Emily was born of the affair.

After sending Corvo on a mission to seek aid for the rat plague from the other nations of the Empire, Jessamine tasked Hiram Burrows with uncovering the origin of the rat plague to determine what, or who, was responsible.[7] Fearing he would be exposed, Burrows arranged for Jessamine to be assassinated two days before Corvo's return to Dunwall, which would allow the Spymaster to take power for himself.

In the period leading up to the assassination, Burrows petitions the Empress to allow the use of aggressive security measures to combat the plague. She strongly rebukes the suggestion, saying that efforts would be made to save all of the people of the city, and she would not discuss the matter again.

When Corvo returns from his mission two days early, Jessamine is distraught to learn that Dunwall is to be barricaded by the other nations of the Empire to stem the spread of the plague. However, before she can address the matter, Daud's assassins attack and neutralize Corvo. Jessamine attacks Daud to save Emily, but is assaulted herself and fatally wounded. After begging Corvo to find and protect Emily, she passes away.

The Outsider removed Jessamine's heart upon her death in 1837[2] and used Piero Joplin to mechanically modify it,[9] turning it into a device designed to contain a spirit. He presented it to Corvo as a "gift" to aid his search for the tools that he would need to avenge her. Jessamine's voice and memories emit themselves from the Heart when Corvo activates it. The Heart has an inconsistent knowledge of the Empress' death,[10] harbors anger toward Daud,[11] and recognizes locations that Jessamine visited during her life, like Dunwall Tower.[12] While all but confirmed during Dishonored, Harvey Smith later confirmed that the Heart is indeed that of Jessamine Kaldwin.[13]

Jessamine was both loved and hated by the people that she served – commendations and condemnations of her can be found throughout Dunwall in the form of graffiti and overheard conversations.

Disappearing after the events of Dishonored, the Heart wound up back in the Void, where either Emily or Corvo collect it during Dishonored 2. In the Void, Jessamine's spirit appears and talks to the protagonist. She appears again later in the game, telling them it is her last night in the world. This prediction is proven correct during the mission The Grand Palace where Jessamine's spirit engages in a heartfelt conversation with the protagonist, after which it leaves the Heart and surrenders itself to the Void. There, Jessamine attains the highest reward of all,[14] peace.[15] 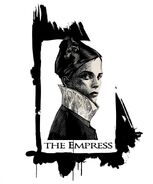 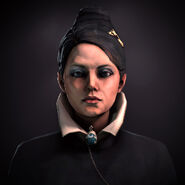 Jessamine and Emily at the gazebo.

Jessamine waits for Corvo with Emily. 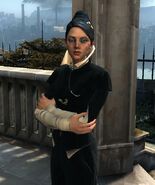 Jessamine waits to receive the decree.

Jessamine reading the decree from the Isles, delivered by Corvo.

Jessamine as she reads.

Jessamine and her daughter, Emily.

Jessamine comforts Emily after the first wave of assassins.

Jessamine protects herself from Daud.

Jessamine attempts to fight Daud as he grabs her by the throat.

Jessamine as she dies.

Jessamine lying dead in the Void.

Jessamine, dead in the Void during The Knife of Dunwall.

Statue of Jessamine Kaldwin in front of the Rudshore Commerce Building.

Statue of Jessamine Kaldwin seen from a different angle.

Jessamine Kaldwin's grave in the gazebo.

Jessamine as the final target in the Kill Cascade challenge.

The Empress, assassinated by Daud.

Anton Sokolov's painting of the Empress.

Jessamine, as she appears in Emily's drawing.

A crossed out image of Jessamine in Daud's hideout.

Jessamine's tarot card in the Dishonored: Game of the Year Edition Tarot Deck.