Jerome is a minor character found in The Brigmore Witches DLC.  He is a vendor living in a second floor apartment in Drapers Ward. Daud can visit him to buy any supplies he needs from his black market shop during the mission The Dead Eels.

The rat plague caused Drapers Ward to crash, allowing the area's two gangs, the Dead Eels and the Hatters, to openly fight on the streets. Jerome was quick to enter the ammunition trade, selling to both sides to make a considerable profit.[1] He was helped by Mr Mitchel of Mitchel's Marketplace, who, upon leaving Drapers Ward, recommended to his old customers that they take their business to Jerome instead.[2]

Before the crash of Drapers Ward, natural philosophers and alchemists used to frequent the area. Jerome collected Oxrush to sell to them. With the coming of the rat plague, they stopped visiting, leading Jerome to contact his friend Griff with a business proposal: Jerome would collect Oxrush and Griff could sell it to the natural philosophers, allowing them both to make a profit. In return, Jerome would help Griff tap into the district's ammunition market.[1]

Jerome is also owed money by Skinflint, a member of the Hatters. Jerome offers to pay Daud for killing Skinflint, and informs Daud of Skinflint's location should Daud accept. 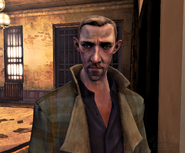 Jerome in his shop. 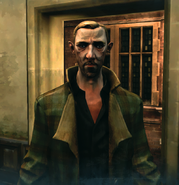 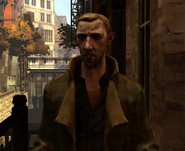 Jerome on his balcony. 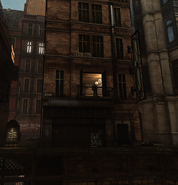 Jerome looks out from his second story apartment.