Jeanette Lee is a character in Dishonored: Death of the Outsider and is encountered during the first mission. She is a member of the Eyeless Gang and runs their illegal fighting pit at Albarca Baths.

After her thugs find the former assassin Daud captured at Albarca Baths in a machine that dampens his magical powers, Lee uses the opportunity to build the run-down baths into an illegal fighting club where customers can bet on the outcome of the fights. Since Daud proves to be unbeatable and remains champion for the following months, Lee keeps him as a fighter instead of turning him over to Shan Yun, Ivan Jacobi, and Dolores Michaels, the leaders of the Eyeless Gang as Daud brings in enormous profits. To prevent Daud from escaping, Lee keeps the key for the power-dampening machine on her body.

When Billie Lurk arrives at Albarca to free Daud, she manages to steal the key from Lee by either pickpocketing her, knocking her out or killing her. If she leaves Lee alive and conscious, Lee will be either knocked-out or killed by Daud once he is freed, unless she is locked in the dogs' cage, where Daud has no access to. 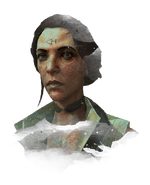 A shot of Jeanette.

Add a photo to this gallery
Retrieved from "https://dishonored.fandom.com/wiki/Jeanette_Lee?oldid=166691"
Community content is available under CC-BY-SA unless otherwise noted.