"Excuse me, my cousin is a marquis!"
—Jane to a Lady aristocrat

Mrs. Jane Blair is an aristocratic guest at the Boyle Mansion during the mission Lady Boyle's Last Party.

Jane is attending a Boyle party for the first time and introduces herself to Corvo, should he speak to her.

She is first encountered in the foyer of the Boyle Mansion, conversing with two other aristocrats. One woman remarks that the Boyles "will just let anyone" into their parties these days, and Jane, thinking that the woman is referring to her and her lack of nobility, claims that she has a cousin who is a marquis.

She offers her own bit of gossip, saying that Waverly Boyle hires City Watch guards to impress her guests. 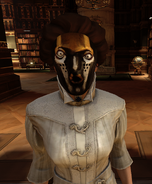 Jane Blair at the Boyle Mansion.

Jane Blair warms up in front of the fireplace.

Jane Blair by the banquet table.