An interrogation room is a torture chamber which functions as a location to extract information from the unwilling in Dunwall.

There are three known facilities with functional interrogation rooms: Coldridge Prison, the Office of the High Overseer, and the Rothwild Slaughterhouse. A fourth location, the Golden Cat, has a similarly designed room, albeit for a different purpose. These areas are used for numerous reasons, from interrogating state criminals to extracting confessions from accused heretics and witches.

Located at the far end of the Prison Yard, the interrogation room at Coldridge is low tech compared to others, yet it is effective at wringing confessions from those suspected of being state criminals. The room consists of two parts.

The main section has an interrogation chair facing a large desk with a picture of the Lord Regent behind it. Implements of torture are kept to the right of the chair, including but not limited to hammers, chisels, and even a small firepit of hot coals.

The second section is located at the back of the primary one. It is lined with shelves and contains two safes, though neither is locked. Various supplies and unused equipment are stored here.

This is the room in which Corvo Attano is tortured by the Royal Interrogator at the behest of Hiram Burrows and Thaddeus Campbell. The secondary area is where the Loyalists hide the clockwork bomb to assist in Corvo's escape.

Prior to the events in A Stay of Execution for Lizzy, a Brigmore Witch named Melina was captured at Dunwall Tower and brought to the prison. She was taken to the interrogation room, but during the course of her torture, the room was destroyed in a display of supernatural power.

During Daud's visit to Coldridge, the room is overrun with roots and plants, and the floor has become swamp-like. The concrete on the floor is broken, jagged, and uneven. Pipes hang from the ceiling resulting in dripping water. In the interrogation chair sits a burnt figure, and strange, low noises can be heard upon approaching it.

The interrogation room is then considered off-limits to all guards after the incident; an Overseer is summoned to investigate the event and remove any taint from the Outsider.

Office of the High Overseer

Stationed on the top floor of the Office of the High Overseer, the interrogation room of the Overseers is a cruel, yet effective, means of extracting information from those accused of witchcraft and heresy.

The room consists of a single chair bolted to the floor inside a caged area. Behind a plaque reading "Order Shall Prevail" is a raised platform with a desk and an audiograph player. This orientation allows the questioning Overseer to look down upon the accused and record evidence while torture is administered. There are chairs available for witnesses who wish to attend.

Implements of torture in the room include pliers and a hose for use against the condemned. Overseers accused of certain crimes receive the dreaded Heretic's Brand, which forever marks the faces of the convicted.

Found on the second floor of the Golden Cat in the Silver Room is a replica of an interrogation room, which caters to those with unique tastes. At the cost of 100 coins per hour, customers can partake in a mock interrogation, being strapped into a sturdy chair and then receiving electric shocks administered by assigned courtesans.

The Silver Room is insulated with metal plates lining the walls. The insulation gives the experience a realistic feel, while preventing unwanted noise from disturbing the brothel's other guests. In the middle of the room sits the interrogation chair next to a small portable generator that is bolted to the ground. The generator has a long cylindrical glass tube housing the whale oil that activates the device. At its current setting, the generator can deliver seven shocks before needing the whale oil refilled.

The room fulfills the needs of certain fetishists. Though meant as a form of titillation and entertainment, the design of the room also makes it an effective place for interrogation should the situation arise.

Installed in the meat locker of the Rothwild Slaughterhouse, Bundry Rothwild's interrogation room was built for a singular purpose: to force his workers to sign an agreement saying they will not strike against him.

Designed by Anton Sokolov and known amongst the workers as "Rothwild's Chair", the interrogation device has been crudely attached to a large stationary generator fueled by whale oil. Electric shocks are administered to the victim, with multiple doses potentially proving lethal. Near the chair is a small table where the victims are encouraged to sign a document renouncing the employee union. A hammer and chisel are kept on another table, if more blunt methods of persuasion are needed.

Despite being purposed for coercion rather than actual interrogation, Rothwild's chair can potentially be used for questioning individuals and even executing them. Most individuals succumb to five shocks (including Rothwild and Abigail Ames), demonstrating that the electrical charge is far greater than that of the chair in the Silver Room of the Golden Cat.

Located within the Clockwork Mansion, the electroshock machine is an electrical implement seemingly designed to willfully induce brain damage upon an individual seated upon it. The insidious device can be found within the study of Kirin Jindosh and is used in the non-lethal alternative to the mission, limiting Jindosh's brain capacity and thus preventing him from causing more harm.

Alternate view on the interrogation room at Coldridge Prison.

Torture implements and a firepit next to the interrogation chair at Coldridge Prison.

A rat in a cage in the interrogation room. 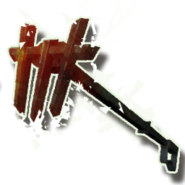 The Heretic's Brand as well as a confession log at the Office of the High Overseer.

The caged interrogation room at the Office of the High Overseer.

View on the interrogation room at the Office of the High Overseer from the hallway.

A tray with pliers for interrogation purposes.

The interrogation chair at the Office of the High Overseer.

A client in the Silver Room.

Bunting struggles against the bonds.

Bunting getting shocked at the Golden Cat. 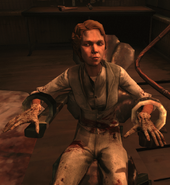 Abigail Ames in the interrogation chair at the Rothwild Slaughterhouse.

Rothwild in his own interrogation chair.

After the interrogation of a Brigmore Witch.
Add a photo to this gallery
Retrieved from "https://dishonored.fandom.com/wiki/Interrogation_Room?oldid=165988"
Community content is available under CC-BY-SA unless otherwise noted.