The Imperial Signet Ring is an item worn only by the Emperor or Empress and the Royal Protector. During the events of Dishonored 2 it is worn by Emily Kaldwin and Corvo Attano. It is placed upon the middle finger of the left hand. Only two copies of the ring exist; one worn by the Empress, the other by the Royal Protector.

The ring appears to be a double band made of silver, with a large square piece set at a 45 degree angle. Within the square is a rose and four keys, each pointing at one of the corners. Each key has a different number of teeth, ranging from one to four. The design is set upon what appears to be a navigational compass design. Upon close examination, the rose is formed by the interlocking bows of the four keys.

The keys symbolize the Empire of the Isles and are also represented on the Kaldwins' family emblem in between a pair of swans.[1]

Although similar, Corvo and Emily's Imperial Signet Rings are not identical. Corvo's ring has a wider band without holes in, and the face is also flatter. Emily's Ring has a narrower band with two small holes in, and it has a taller face.

The ring is the key of an intricate locking mechanism that seals the Imperial Safe Room off from the rest of Dunwall Tower. Designed by Anton Sokolov after the events of Dishonored, the ring's seal, when placed into a small panel next to one of the three doors to the safe room, opens and closes these doors. The ring was stolen from Corvo or Emily by Mortimer Ramsey during the Coup, and reclaiming it is necessary to be able to flee the Tower. 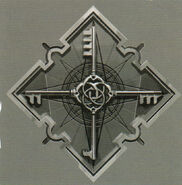 Signet ring viewed from above in The Art of Dishonored 2.

Signet ring viewed from the side in The Art of Dishonored 2.

Emily putting on her ring.

The ring upon Emily's finger.

Another depiction of the ring on Emily's hand, while holding a rune.

The ring is visible while Meagan ferries Emily to her destination.

The ring is visible on Corvo's finger as he stalks his target.

The throne shares the same symbol.

The emblem is seen on the banners of Jessamine Kaldwin.

The symbol appears on the throne in the Void.

The ring in the Collector's Edition.

The ring and display case from the Collector's Edition.

Bethesda's silver replica of the ring.

The color for the ring is listed.

Corvo's and Emily's Imperial Signet Ring.
Add a photo to this gallery

Retrieved from "https://dishonored.fandom.com/wiki/Imperial_Signet_Ring?oldid=166507"
Community content is available under CC-BY-SA unless otherwise noted.