The Howlers are a gang in Karnaca led by Paolo and Mindy Blanchard.

They see themselves as idealists and revolutionaries, trying to wrestle control of the city from the corrupt Duke Luca Abele and the Grand Guard for the good of the working people. They don't consider themselves as a gang per se, and see their acts, even against innocents, as justified.

The Howlers target, threaten and rob both upper and upper-middle class citizens who stumble upon them; referring to them as "parasites". In several areas, this definition extends to the protagonist, due to their refined clothing. Though this hostility could also be due to them not liking competition, as mentioned by Paolo.

Black market merchants pay the Howlers protection money to keep their shops safe from looters and perhaps stray Grand Guard. If the protagonist robs too many such stores, they will attempt to ambush them in the Palace District.

They are currently locked in a territorial conflict with the Overseers over the Dust District at the edge of the city.[1]

There are times in the game where they can be situational allies.

Howlers are adept as using both their swords and wristbows simultaneously in combat. They will fire different forms of ammunition while in combat, using bolts to damage at range and howling bolts to stun enemies. In addition, they make use of hallucinogenic powder to severely disorient their targets. If the protagonist is under the influence of the powder, their reaction time is significantly slowed down.

Paolo, the leader of the gang.

Members of the Howlers Gang dance in a saloon within the city of Karnaca. 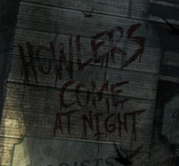 "...the Howlers' sword, made out of a tailor's scissor because the gang pays a lot of attention to their clothes".

"First sketch of the Howlers' sword".

Wanted poster of the Howlers gang.