House of Pleasure is the third mission in Dishonored, in which Corvo Attano must enter the Golden Cat pleasure house to eliminate Custis and Morgan Pendleton – two parliamentarians in support of the Lord Regent – and find and rescue Emily Kaldwin.

Martin is on his way to join the Loyalists, and Campbell's fate has thrown the Overseers into disarray. Decoding the High Overseer's journal may reveal any number of strategic secrets, most notably the location of the rightful heir to the throne, Emily Kaldwin.

The Loyalists believe that Emily is being held at the Golden Cat by the corrupt, aristocratic Pendleton brothers. These men are Lord Pendleton's despised older brothers, twins, and they are loyal to the tyrannical Lord Regent. Find Emily at the Golden Cat and eliminate Lords Custis and Morgan Pendleton.

Corvo can find Farley Havelock and Pendleton outside near one of the sewer entrances in the back. Havelock will ask Corvo to investigate the sewers, saying that there have been odd sounds coming from them lately. He will also recommend that Corvo speak to Piero, who can give him a combat sleep dart upgrade.

Upon descending into the sewers, Corvo discovers two weepers and two runes in the vicinity. He can kill them or knock them out, leaving the bodies there.

Teague Martin arrives while Corvo is gone and can be found with Havelock in the pub. As Corvo exits the sewers, Cecelia will comment on his courage for braving the area and inform him of Martin's arrival. Havelock and Martin will not brief Corvo on his mission, but will tell him important information. Outside, Pendleton waits for Corvo so that he can brief him personally on the mission to assassinate his brothers.

In the workshop, Corvo can find Piero speaking to Callista about the machines he designed for the Golden Cat, implying they are sexual in nature. Callista is disgusted, saying that she only brought Piero tea as a favor. Piero, realizing he misunderstood Callista's intentions, thanks her for the tea.

If Corvo goes to Havelock's room after this display, he will find Callista there, waiting for the admiral to return. Havelock will remind Callista of her duties when Emily arrives, telling her of the importance of her job.

Pendleton's memoirs and Piero's audiograph log are also updated. Havelock has thrown his audiograph player into the river, where it was recovered by Samuel, who has now recorded his first audiograph log.

To avoid the newly installed Watchtower at the beginning of John Clavering Boulevard, go toward the Dunwall Whiskey Distillery. A Bottle Street thug there informs Corvo that Slackjaw wants to meet him. Follow the thug.

Bottle Street is a Neutral Zone, so Corvo is free to move about the area. Slackjaw will be waiting for Corvo in the distillery, and will ask Corvo to go to the Offices of Dr. Galvani to find his missing associate in exchange for a reward.

Once inside Galvani's residence, avoid or neutralize the guards and head to the top floor. Two Officers will be inside, standing over the corpse of Crowley, Slackjaw's informant. Wait until the Officers separate; one will go out into the stairwell, and the other will patrol the room. Grab the audiograph next to the corpse. There is a rune located where the rat viscera was in the previous mission, which can be retrieved before leaving the building.

Return to the Distillery

When Corvo returns to Slackjaw, a cut scene will play - Slackjaw listens to the audiograph and, satisfied, gives Corvo the key to the Captain's Chair Hotel, simplifying the approach to the Golden Cat.

Slackjaw then offers Corvo a second deal: find Bunting, the art dealer, and retrieve his safe combination. In exchange, Slackjaw will have the Pendleton brothers dealt with for Corvo "real quiet-like." This represents the mission's non-lethal elimination.

If using the rooftop access provided by Slackjaw, Corvo can cross to the left or right sides of the Golden Cat with ease and without attracting attention. This becomes easier when using Blink Tier II.

The brothers can be located by three different means:

Both the Smoking Room and the Gold Room are on the third floor. To gain access to the smoking room, the easiest method is to enter from the outer balcony, which can be reached from another balcony nearby. Corvo can enter through the door. If Corvo wishes to be stealthy, he can hide behind the room divider or underneath the dresser.

The Gold Room is more difficult to access from the outside, as the balcony is difficult to reach. To enter from inside the building, Corvo must make his way to the third floor, avoiding any guards. One guard will patrol the area in front of the door, periodically looking through the keyhole. Another guard will patrol the entire floor, and a third guard stands near an outer balcony.

If Corvo does not alarm him, Custis can be witnessed expressing his anger toward Lady Boyle, telling his courtesan, Violetta, a bit about his current financial situation. The courtesan will suggest that she dress up as Lady Boyle, and Custis agrees, saying that he would "like to teach her a lesson".

The Ivory Room is located on the second floor and can be accessed from outside through a broken window or through the doors. Two guards patrol the floor, but there is no guard posted directly outside the room.

The Steam Room is on the lower level, where two guards can be found discussing the Pendletons' financial situation. Once they are finished speaking, one will patrol the room while the other stands with his back to the stairs. Morgan is in the nearest room with a courtesan, Loulia, and discusses politics with her while receiving a hand massage. To easily kill Morgan, Corvo can enter the caged room across from the stairs where he can increase the steam until it bursts from the pipes, killing Morgan and the courtesan and earning an achievement.

As with the twins, Emily can be located by two different means:

Emily can be found in a room on the third floor of the Golden Cat. When the door is opened, a cut scene plays as Emily and Corvo reunite. Emily will then tell Corvo that she knows a way out through the VIP exit at the base of the stairway. The Golden Cat Master Key, which can be retrieved from Madame Prudence, is required to open it.

Once through the VIP exit, Emily will run ahead, saying she will meet Corvo at Samuel's boat. Once he leaves the Cat, Corvo will encounter Granny Rags. In the area outside will be a group of weepers - neutralize or avoid them, and leave the alley.

If completing the non-lethal elimination, Corvo can now return to the Distillery District. Otherwise, meet Samuel and Emily at the riverboat and return to the Hound Pits Pub.

Completing the first mission for Slackjaw opens the non-lethal elimination for the Pendletons. To utilize this elimination, Corvo must find the art dealer, Bunting, at the Golden Cat, and procure his safe combination.

While the locations of the Pendleton brothers change with each playthrough, Bunting is always in the Silver Room. When Corvo enters, Bunting is blindfolded and strapped into an electric chair. He mistakes Corvo for his typical courtesan, and chooses a safe word before instructing Corvo to electrocute him.

After Corvo electrocutes him several times (during which Bunting reveals how he has been swindling the Pendletons out of their fortune), he will use his safe word. Ignore this command and shock him twice more. Bunting will realize that Corvo is not his regular courtesan and ask what he wants. He will then easily reveal the combination to his safe when prompted.

When Corvo returns to the Distillery District and gives Slackjaw the combination, Slackjaw will reveal what is in store for the twins: his thugs will abduct them, shave their heads, cut out their tongues and put them to work in their own silver mines. The Art of the Steal achievement will be awarded if Corvo loots the safe before giving Slackjaw the combination.

Corvo, Samuel, and Emily arrive at the Hound Pits to find Callista, Lydia, and Wallace waiting for them by the edge of the river. Wallace can be seen running towards the stairs and then calling out for the maids. Corvo helps Emily from the boat, and Callista welcomes her. After Emily goes to her room with Callista, Havelock congratulates Corvo on a job well done.

From there, if Corvo walks toward the tower, he will find Lord Pendleton. Pendleton says that he never imagined that he would be the one to provide the family's next heir and reveals that he has bastard children. Additionally, he calls for Wallace as he tries to hide his guilt, joking humorlessly and promoting Wallace to "Head Lackey".

After Pendleton is finished talking, he tells Corvo that Havelock wants to speak with him.

Pendleton and Havelock outside the sewers.

Corvo spots two weepers in the sewers underneath the Hound Pits. 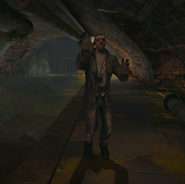 Corvo arrives at the Distillery District.

The new watchtower in the Distillery District attacks weepers on the bridge.

Weepers running from the watchtower.

A Bottle Street Gang thug informs Corvo of Slackjaw's interest in meeting him.

An assassin lurking on the balcony of an abandoned apartment. 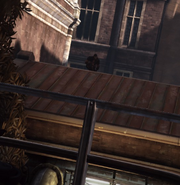 An assassin on a roof near Griff's Curio Shop. 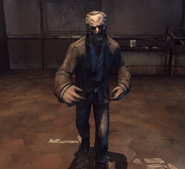 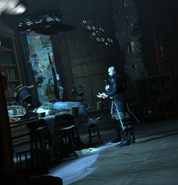 Crowley, dead in the Galvani Residence.

Slackjaw has a proposition for Corvo.

Corvo fights a City Watch Guard during the House of Pleasure mission. 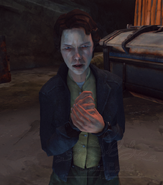 A woman thanks Corvo for saving her life.

The parlor at the Golden Cat. 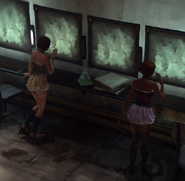 Two courtesans in the washroom. 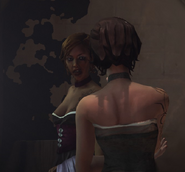 Betty chatting with her fellow courtesan.

A City Watch Officer with a courtesan in the Steam Room.

Bunting attempts to escape from his chair.

A guard peeping on Custis Pendleton and his courtesan.

Custis Pendleton and a courtesan in the Gold Room.

Corvo watches Violetta from above.

Corvo fights Morgan Pendleton in the Steam Room at the Golden Cat.

Emily sitting in her room at the Golden Cat. 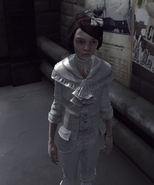 Emily waits for Corvo to unlock the door leading out of the Golden Cat.

Granny Rags tells Corvo a story in the House of Pleasure mission.

Corvo is chased by weepers in the House of Pleasure mission.

Corvo fights a thug at Bunting's home in the House of Pleasure mission.

The inside of Bunting's safe.

The fourth assassin standing on a roof.

Close-up of the fourth assassin.

Corvo is spotted by the teleporting fifth assassin.

Both assassins seen standing on the roof.

Emily and Samuel arrive at the Hound Pits.

Corvo takes Emily's hand after she exits the boat.

Emily leaves with Callista and the others.

Pendleton waits for Corvo after the mission. 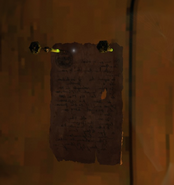 A map of the Golden Cat.

An outdoor map of the Golden Cat and the surrounding area.
Add a photo to this gallery 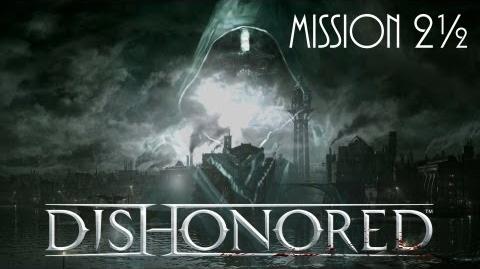 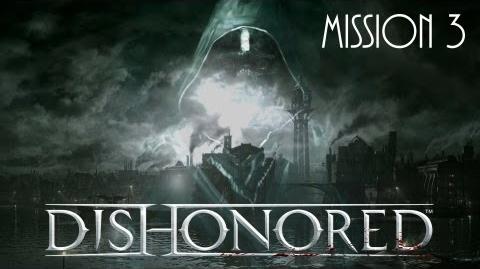 Retrieved from "https://dishonored.fandom.com/wiki/House_of_Pleasure?oldid=166752"
Community content is available under CC-BY-SA unless otherwise noted.