Hiram Burrows, known officially as the Lord Regent, is the mastermind of the coup against Empress Jessamine Kaldwin, alongside Thaddeus Campbell. To cover his tracks, Burrows blames her death on her bodyguard, Corvo Attano, who is subsequently imprisoned. Burrows acts as the main antagonist for the first two-thirds of Dishonored.

His oppressive and corrupt rule against the people of Dunwall leads to dissatisfaction and eventual rebellion. This dissatisfaction becomes more pronounced as Corvo eliminates Burrows' allies, cutting off his funding and crippling his ability to pay the City Watch. Burrows, however, blames the city's problems on the Empress and the laziness and disorder of the common folk.[2] Corvo is tasked with assassinating him during the mission Return to the Tower.

Before taking on the role of Lord Regent, Burrows was the Royal Spymaster. As such, he worked with great impunity and little oversight, staging campaigns of espionage against the gangs of Dunwall (including the Bottle Street Gang) and making plans outside even the Empress' knowledge.[3]

The Heart reveals that Burrows suffers from a compulsive need to have everything in order,[4] a characteristic which is also shown in his field notes. Several years prior to the events of Dishonored, he began internal investigations to root out traitors within Dunwall's government, which put him at odds with the Empress; he claims that "her very nature as a trusting person" blinded her to the work of traitors that "must" move among them.[3]

Burrows is distressed by what he perceives to be a lack of concern on the Empress' part for security and order, saying "[she] would rather spend her time with the Royal Protector". He also disapproves of how she parents Emily Kaldwin, saying that the child is undisciplined and spoiled, and that "every moment spent at play is a moment wasted."[3]

An audiograph stolen from Burrows' safe during the Return to the Tower mission reveals that the Rat Plague was caused by Burrows himself: he and his retinue introduced infected rats from the Pandyssian continent into the poorest quarters of Dunwall to eradicate poverty by eliminating the poor. However, the plague quickly spiraled out of control.

Burrows feared that his scheming would be discovered by the Empress, who had ordered him to investigate the matter for evidence of foul play. He then commissioned the assassin Daud to eliminate her and arranges for Corvo to be executed for the crime.[5] Thereafter, he takes charge of the Empire as Lord Regent in order to steer it toward what he envisions as Gristol's grand, shining future.

Lady Boyle is his mistress of several years.[3] She is also his financial backer, though whether or not this preceded his rise to Regency is unknown. He is deeply fond of her, spending his limited off-time in her company, and is highly distressed by her eventual fate.[6]

One by one, Corvo, takes out members of Burrows' conspiracy, crippling his government along the way. Eventually, Corvo is tasked with the elimination of Burrows himself. Corvo can either kill him or expose him by stealing the incriminating audiograph and playing it over the city's propaganda system, having him arrested for high treason and ending his reign. 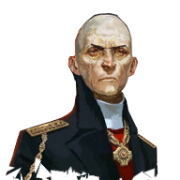 A painting of Hiram Burrows by Anton Sokolov.

Hiram Burrows at a ceremony, in his official capacity.

Closeup of the painting of Hiram Burrows' ceremony. 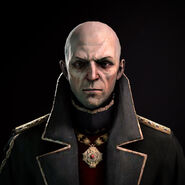 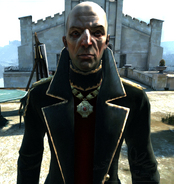 Burrows by the flowers at Dunwall Tower.

Corvo is framed by Burrows and Campbell for the Empress's assassination.

Burrows and Campbell in the interrogation room.

A close up shot of Burrows' face. 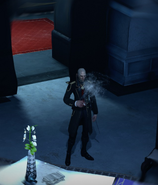 Hiram Burrows smoking a cigarette in his quarters.

Hiram Burrows talks to Corvo before the confrontation.

Burrows before being killed.

Hiram Burrows in the basement of Dunwall Tower, after escaping arrest.

A golden statue of the Lord Regent, found in his lighthouse on Kingsparrow Island. 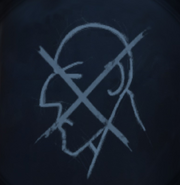 A disparaging doodle of Hiram Burrows.

A portrait of the Lord Regent, stabbed by an assassin's blade.

A Wanted poster featuring the death of Hiram Burrows.

Burrows planning at a strategist's table.