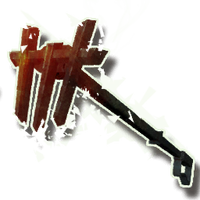 The Heretic's Brand refers to both a dire punishment leveled on an Overseer, and the tool used to administer said punishment.

The brand is a punishment only applicable to members of the Abbey, including the High Overseer himself. The sentence is only given to someone who has committed a great wrong in failing to abide by the Seven Strictures of the Abbey of the Everyman, but has not committed a civil crime. It is a minor criminal offense to offer aid, shelter, or solace to anyone who bears the brand.[1]

The Brand in the interrogation room.
Add a photo to this gallery

Retrieved from "https://dishonored.fandom.com/wiki/Heretic%27s_Brand?oldid=169309"
Community content is available under CC-BY-SA unless otherwise noted.