Dishonored Wiki
Register
Don't have an account?
Sign In
Advertisement
in: Spoilers, The Knife of Dunwall, The Brigmore Witches,
and 4 more
English 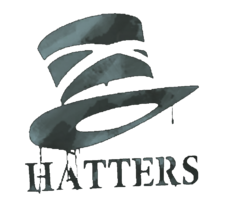 "What were the Hatters before I arrived? I'll tell you – a shadow of their former selves. The butt of numerous jokes, in fact."
—Nurse Trimble to the Geezer

The Hatters are a major gang in Dunwall and one of the oldest still in activity. They appear in The Knife of Dunwall, The Brigmore Witches, and Dishonored 2.

Hatters are easily recognized by their top or melon hats. They dress with shirts and braces, and are armed with cleavers and pistols. Their base of operations is the textile mill in Drapers Ward.

The Hatters are headed by Mortimer Hat, an elderly man kept alive via experimental life support machines. However, the Geezer, as he is called respectfully by his men, is merely a figurehead. The gang is led by his nurse, fallen natural philosophist William Trimble. Acting as the Geezer's spokesperson due to his weakened condition, Trimble exacts his will upon the gang. He even provided them with new Sokolov technology to use in their territorial fight against the Dead Eels. If Daud so chooses, he can put the Geezer out of his misery, effectively destroying the gang.

Fifteen years later, members of the gang dress in much the same attire as before, including their signature hats, and also wield cleavers and pistols in combat. They also have female members who wear bowler hats and use large tailor scissors as weapons instead of the cleavers.

The Hatters started out as a gang outside Dunwall. They appeared in Dunwall in 1829 after their leader, Mortimer Hat, invested in Drapers Ward to turn the former industrial district into a lavish clothing shop center. The gang was there to keep the underpaid workers in the factories and textile mills in line. However, this corruption would later grow out of control, driving out the customers and contributing to Drapers Ward's 1835 financial crash.

Outside Drapers Ward, the Hatters grew to be the most prominent syndicate in Dunwall. However their forces were substantially weakened by the coming of the Rat Plague and the subsequent upturning of the city's criminal underworld. After losing the Dunwall Whiskey Distillery to the Bottle Street Gang, being driven out of Slaughterhouse Row by the Butchers and cut from the Wrenhaven River by the Dead Eels, the Hatters resorted to inciting gang warfare to recover their territory.[1]

Trimble's plans helped the gang to recover. He made a secret deal with Edgar Wakefield, second in command of the Dead Eels, to supplant their leader Lizzy Stride. When the water canal powering the textile mill stopped flowing, he used Wakefield to get a vital engine part of the Eels' ship The Undine to power their mill. This however pushed further the conflict between the Hatters and the Dead Eels. By the Month of Harvest 1837, the two gangs were at each other's throat, despite Wakefield still owing Trimble for giving him control of the Dead Eels.

During the 15 years following the end of the plague, the Geezer finally passed out. The gang survived, although it splintered. One of the new factions, the Roaring Boys Gang, went to be a notorious actor in the city's smuggling activities. Others quit criminal affairs to be employed by Slackjaw, the previously public leader of the Bottle Street Gang turned legit businessman. The Hatters were still able to take advantage of Delilah's Coup to move in the Tower District and steal from the abandoned apartments.

The Hatters are first encountered in the Legal District Waterfront, where they can be found holding Thalia Timsh hostage. They are using the Black Friar pub as outpost to plunder the emptied area and are looking into entering the district proper. One of their members managed to steal the gate's key from the City Watch officer commanding the area, at the cost of his life.

A few Hatters can be found at Coldridge Prison during Daud's intrusion to rescue Lizzy Stride. They harbor true hatred against the previous leader of the Dead Eels and have been isolated from her cell.

Later, they are encountered on their territory in Drapers Ward, where they are both pushing back Dead Eels skirmishes and provoking them on their own territory. When met, Nurse Trimble can make a deal with Daud on behalf of the Geezer. Daud will be given the Dead Eels' engine coil back in exchange of restarting the canal's water pumps. Meanwhile, the Hatters will stay neutral.

During the Coup in 1852, two Hatters are conversing on a dock in the Tower District. They express a desire to establish black market shops in Dunwall, as the Howlers have done in Karnaca. Upon Corvo or Emily's return in Dunwall, more members started occupying the abandoned buildings in the district. One of them was able to recover the pieces of a broken down Clockwork Soldier and intends on either selling it back, or trying to make it work again for the gang. 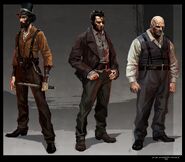 Graffiti at the Dunwall Whiskey Distillery. 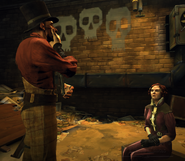 Daud watches as Thalia Timsh is held hostage by Hatters.

Daud sneaks up on two Hatters standing on a roof.

A Hatter during a fight.

Daud fights Hatters in an alley.

A Hatter gets ready to shoot.

A Hatter shoots at Daud.

A Hatter gets ready to shoot his pistol inside the house.

Chauncy at the Black Friar.

A dead Hatter in the Drapers Ward Sewer.

Daud slashes at a Hatter in Drapers Ward.

A group of Hatters examining parts of a Clockwork Soldier.

Promotional artwork for The Brigmore Witches depicting the Hatters in Drapers Ward. 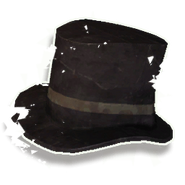