Hagpearls are a type of special ammunition for the voltaic gun. They look like tiny bouncy black balls that mainly serve as a distraction, but can also be used to push inaccessible buttons from a distance or to knock out targets with the charged shot upgrade. Billie Lurk can only hold one hagpearl at any given time. Black market shops do not sell hagpearls, and there are a finite number of hagpearls found in the missions:

Hagpearls are what the hagfishes spit out when they ate something but cannot digest such as bones or silver teeth of a dead person. They are waxy and smell bad when first spat out, but harden as they dry. They are easily mistaken for river krust pearls, but nowhere near as valuable. Kids are seen using hagpearls as projectiles for slingshots, while it is considered bad luck by dockworkers when they open a hagfish belly and a bunch of them pour out. They are even made into talismans by some people in order to cast misfortune on others.[1] 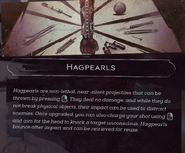 Hagpearl as seen in the tutorial.
Add a photo to this gallery

Retrieved from "https://dishonored.fandom.com/wiki/Hagpearl?oldid=165189"
Community content is available under CC-BY-SA unless otherwise noted.