Hackworth is a minor character and a City Watch Lower Guard featured in Dishonored during the first mission of the same name. He can be found in the prison yard at Coldridge Prison.

Having been assigned to the renowned prison, Hackworth is tasked with various duties, including patrolling the prison yard. Remarks from some of the guards also assigned to Coldridge suggest that not all the men employed there are doing their jobs properly, to the point where their rations of elixir are under threat of being taken away. Hackworth, however, seems to be one of the more dutiful prison guards, even going so far as to inspect the compound, reporting any problems he encounters. 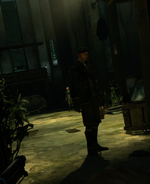 Retrieved from "https://dishonored.fandom.com/wiki/Hackworth?oldid=110819"
Community content is available under CC-BY-SA unless otherwise noted.