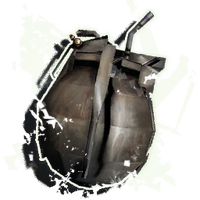 The grenade is one of many offensive gadgets available to in Dishonored, the DLC, and Dishonored 2. A metal shell packed with a thick tar made from whale oil, they are standard issue for Overseers. They can be "cooked" to shorten the fuse (an action that can be cancelled in Dishonored 2), and the packs carried by Corvo Attano and Daud can be upgraded to carry a greater amount.

They are extremely useful against tough enemies, such as tallboys or large groups of City Watchmen. They are also one of the few offensive items effective against river krusts.

Grenades can be used along with supernatural abilities such as Bend Time and Windblast, allowing Corvo to deflect grenades thrown by enemies and to increase throwing distance, enabling long-range kills.

Activated grenades thrown at Corvo by enemies can be picked up and thrown back. Killing an opponent in this fashion will unlock the Back Home achievement.

Close-up of a flying grenade.

Daud uses a grenade on a swarm of rats.

Corvo prepares to use a grenade against tallboys.

A guard is sent flying from the percussive force of a grenade.

Corvo uses a grenade on a swarm of rats.
Add a photo to this gallery

Retrieved from "https://dishonored.fandom.com/wiki/Grenade?oldid=140649"
Community content is available under CC-BY-SA unless otherwise noted.